Inheritance From Mother by Minae Mizumura

A drama against the overly dramatic 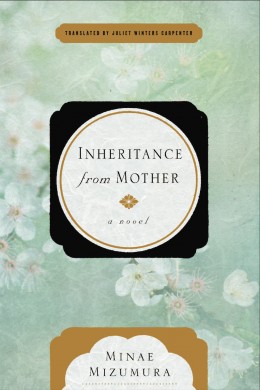 Cover photo from Other Press.

At first glance, Minae Mizumura’s Inheritance from Mother has all the elements for a page-turning melodrama. Originally a newspaper novel serialized in the Yomiuri Shinbun, the plot contains a dying mother, a cheating husband and a large inheritance.

But while the stage is set with all the right props for a soap opera, the novel and its protagonist — Mitsuki Katsura, a middle-aged French teacher in Tokyo — consistently pull back the curtain to show the not-so-pretty hardware running to make that set function. So the dying mother suffers from constipation and a tranquilizer addiction; the cheating husband, worried about money, calculates divorce settlements with his young (but not that young) paramour; and the large inheritance isn’t so large that its heirs would be able to stop working.

This resistance to maudlin emotions and sensationalized events is evident from the first pages with the shockingly practical line, “Once she saw that her mother’s death was imminent, Mitsuki had taken to opening Golden’s pamphlet and studying the page with the refund scale.” Golden is the expensive nursing home Mitsuki’s mother, Noriko, enters after being hospitalized for a fall. The unsentimental attitude Mitsuki has towards her mother is often repeated throughout the novel with lines such as: “Burdened by her mother’s constant needs and wants, Mitsuki had felt the joy of life wither and fade.” At the same time, Mitsuki is a diligent caretaker, trying to ensure a comfortable and, if possible, dignified end to her mother’s days.

Noriko is in many ways the antithesis of the disillusioned Mitsuki — the illegitimate child of a geisha, her own life was a tempest of emotion and drama replete with affairs, divorces and castles in the sky. The many problems Noriko’s idealism causes her family is one of the ways the novel emphasizes the dangers of romanticism.

Mizumura’s depiction of Noriko and her ungraceful aging, descent into senility and fretful grasping at the dregs of life’s pleasures — and the ensuing burden on her children — is unforgiving. Perhaps all the more relevant with Japan’s aging society, Inheritance from Mother has little patience with ideals of filial devotion and self-sacrifice, and its almost graphic descriptions of aging and illness force the reader to shed all illusions about caring for the aged: “Mitsuki’s wish for her mother to die was abstract—tinged with poetry, even. By contrast, the words ‘portable toilet’ had a stark reality that caught her off guard.”

Noriko’s illness and the history of the mother-daughter relationship between her and Mitsuki form a central part in the novel. In some parts, this is overly drawn-out, stalling plot developments in other areas; for much of the novel, it’s hard to imagine newspaper readers waiting breathlessly for the next installment. The novel makes this point clear: In the face of sickness, old age and death, there are no bedside words of wisdom or heartfelt expressions of emotion. Instead, there are pajamas with elastic waistbands and pills to move your bowels.

Mizumura is a somewhat contrarian figure in the global literary scene. Aside from Inheritance from Mother, she has two other titles translated into English, 2013’s A True Novel and 2015’s The Fall of Language in the Age of English (all translated into English by Juliet Winters Carpenter). Born in Japan but coming of age and completing her secondary and higher education in America, she has been critical of the impact of the dominance of the English language on Japanese literature and has made a name for herself as (as her website says) “A Novelist Writing Modern Japanese Literature in the Japanese Language.”

This is marked by her return to Japan as an adult and her decision to publish in Japanese rather than English. As Japanese-English translator Stephen Snyder has commented, her untranslated novels are — with their deep historical contexts, cultural cues, and mixing of languages and genres — seemingly intentionally untranslatable, going against the tide of internationalized authors such as Haruki Murakami.

Inheritance from Mother shows Mizumura’s preoccupation with the influence of Westernization on the Japanese national consciousness. The novel possesses a complex intertextuality, referencing both Gustave Flaubert’s 1856 classic, Madame Bovary, and the suspenseful, melodramatic 1897 Japanese serial novel, The Golden Demon, to show the influence of novels on women’s fantasies and dissatisfaction with reality.

“The Western novels that had reached Japan in the last century and a half were almost all romance novels, transforming Japanese readers — especially women — into romantics,” Mizumura has Mitsuki think. The romanticism in the generation of women who read The Golden Demon is the Japanese equivalent of bovarism — a term coined for the phenomenon of “women who read too many novels and have unrealistic fantasies about love and life.”

Yet Mitsuki, too, is a novel-reader, and she is not exempt from idealism. Although Inheritance from Mother is, in some ways, heavy-handed in its extreme realism and its hammering in of the existing gap between dreams and real life, it is not unsympathetic to contemporary women who find that life has failed to match up to their youthful ideals. The dying mother, cheating husband and not-so-large inheritance are all realities which have disappointed Mitsuki — and like many contemporary women, Mitsuki is then confronted with the question of how she ought to live a fulfilling life. The novel’s asking of that question is ultimately the biggest reality check it gives.