Alex Dodge: The Trauma of Information

Metropolis: For Art Fair Tokyo 2019 you will be exhibiting work from a series in which the main motif is the New York Times. Could you tell us more about why you chose this theme?

Alex Dodge: The place of origin for these works was in some ways Japan. I was living in Tokyo for four months during my fellowship with the Japan US Friendship Commission and Bunkacho. I had set up a small studio to make work and during that time the 2016 US presidential election took place. I overheard another American living in Japan at the time describe the sensation of watching the election unfold as if witnessing a nuclear war happen while aboard the International Space Station. Seeing what felt like absolute destruction taking place but from the safety of a remote location; feeling utterly powerless to do anything but watch from afar as the planet destroyed itself. Though I have many great friends in Japan, it was difficult to find those that I could commiserate with or express the feelings of sorrow, grief, and sense of uncertainty for what laid ahead back home. All I could do was watch and read the ceaseless engine of news media in hyperdrive trying to reconcile the new political reality.

After returning home to New York, the familiar Brooklyn that I knew felt washed in gray, heavy and defeated. Within the new dismal cloud, the news became like an addiction that, however painful it was to consume, could not be resisted. There is often a sense of powerlessness that we feel in its rapid and unending stream; one headline overtaking the previous for attention with greater urgency and sensation. In my opinion the current pace of media and perhaps its quality have created a kind of time dilation to occur in how we experience our world. The sheer volume of daily information that we consume affects our ability to build a considered long term perspective. Our memory is not what it used to be. Though the internet can be like an archive in which past events can be referenced and checked against the present, it’s also like a dynamic living organism that shifts and folds, often obscuring or distorting our view of recent history through personalized search and social media. 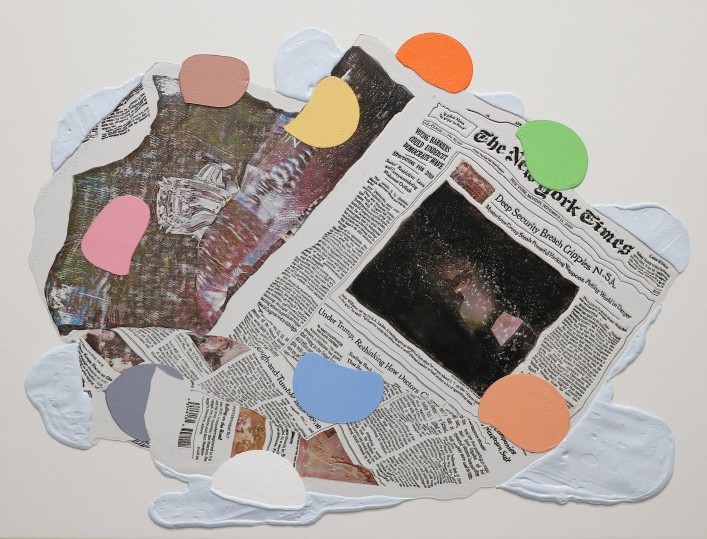 These works sought to take hold of the news in a form that could be solidified; made material and static. These fleeting moments are grasped in the form of reproductions of physical newspapers, a form of media currently in decline, but one that I hope never goes away. I cherish the tactile paper and printed media of this antiquated format. These newspapers that have become thick layered oil paint are often depicted as they might appear after someone has read them; cast aside or disposed of, thrown away or recycled along with our memories of their contents. These paintings make the ephemeral and momentary into solidified, hard-to-dismiss artifacts through painstaking reproduction and the transformation into another medium. Each is unique, created using a system of block printing and hand-applied oil paint. The glimpses of content that they reveal in broken text and image are often mundane in their parts but as a whole can offer a unique reflection of the time we live in; at times that view is global and at others deeply personal.

This ongoing series is an homage to a media in pain and which also pains us. It is the trauma of information that can only be survived with perspective; a perspective that is gained through humor and irony that makes the pain bearable but not forgotten.

AD: While printmaking techniques have been central to my practice for many years — including the use of various types of stencils— it was not until I witnessed the traditional Japanese textile printing technique known as katazome that I was able to develop some of my current techniques. Katazome employs elaborate, hand-cut washi paper stencils that are used either as a direct image mask for hand applied dye or as a mask for rice-based dye resist. The resist paste dries and resists dying in much the same way that Batique dying uses wax. It is later dissolved and washed out after the dye has set into the textile. The latter technique is what has inspired my current technical process. While watching trained artisans apply rice paste through stencils I realized that the viscosity was very similar to oil paint and so I began experimenting. I’ve since developed customized tools for applying paint this way. While traveling in Japan I visited a traditional workshop in Toyama called Keijyusha that uses a version of this technique for paper called katagami. They do incredible work there.

The use of a laser cutter for me is really a practicality. I believe that an artist’s process has to find itself within the limits that they live in, and for me that limited resource is often time. The ability to do things relatively quickly is important to me. Again, maybe that’s because of the perceived pace of things these days, but ultimately I see technology as a tool. It can do a lot but it has to be understood in a way that makes it interesting. 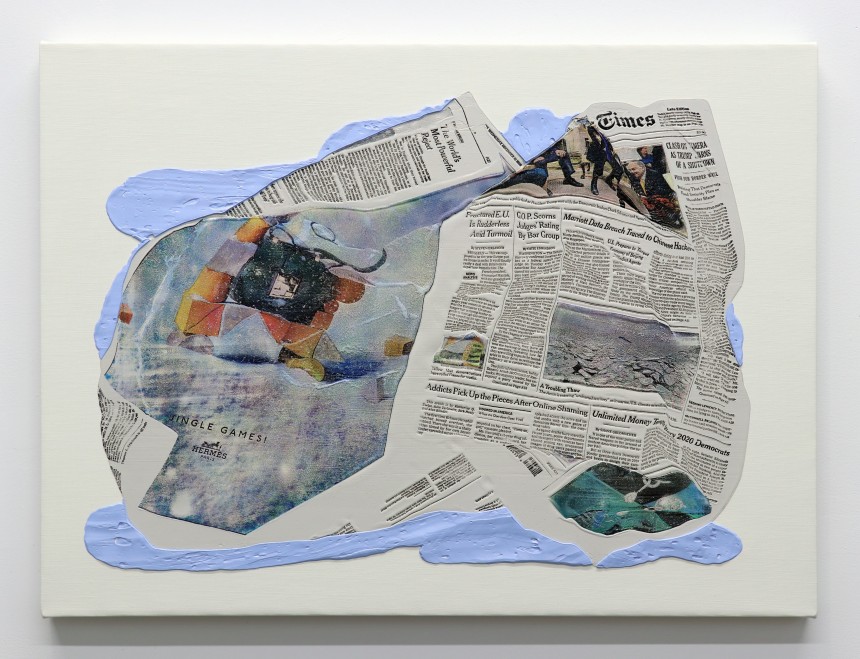 M: This is going to be your first exhibition in Japan, soon followed by your solo exhibition at Maki Fine Arts. What are your feelings about showing your work in Japan?

AD: I’ve been visiting Japan regularly for the past 15 years and have been wanting to show my work here ever since my first visit. Somehow the connection didn’t happen until recently. A good friend of mine, a Japanese artist living in Brooklyn named Shinsuke Aso who also shows at Maki Fine Arts, made the introduction. Maki-san saw my work in New York during the NADA art fair a year ago and was really excited about it. We met in Tokyo a month later and really connected. Maki-san has a great program with some amazing artists. I’m really happy to be showing with them.