FEMM twerks hard for the money

The global image of Japanese music could be forever altered by the audio-visual explosion that is Far East Mention Mannequin—better known as FEMM.

The surging currents of American electrohop, J-electro and Eurotrance that dominate the duo’s refreshingly in-your-face sound is powered by an even slicker image: FEMM is fronted not by people, but by two “living mannequins” named RiRi and LuLa. The mannequins are in turn represented in public by “agents” going by the monikers Honey-B and W-Trouble.

If that sounds like the roster of the next X-Men sequel, just wait for the visuals: RiRi and LuLa’s hypnotic, tandem-choreographed music videos feature the plastic duo decked out in form-fitting rubber costumes designed by GM Atelier, transforming them into shiny schoolgirls, gleaming French maids or Tron-like combat automatons. 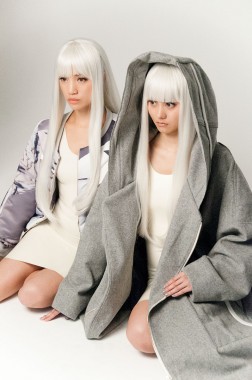 Lyrics fly across the screen, highlighting FEMM’s second double-take-inducing strength: in a nation notorious for its mangled pop-song English, FEMM’s command of the language is so pitch-perfect it hits like a body check. “I’m like a hurricane—insane,” the two declare in “Kill the DJ.” “Move—hey, hey—I’m ’bout to devastate.”

All of FEMM’s tracks are officially sung by the mannequins. But Honey-B and W-Trouble appear as themselves in the opening of their debut single, “Astroboy”—allowing the agents to share a tenuous moment of discussion through the veil.

“FEMM’s music includes a lot of rapping and speaking kind-of-rapping,” Honey-B says in nearly fluent English, her eyes concealed behind silver sunglasses.“And even in the singing part, the pronunciation for certain words with attitude is very important.”

Remarkably, W-Trouble says she’s only “learning” English. “For the little details, to be honest, I don’t really want to rely on Honey-B,” she admits in eloquent Japanese. “But the truth is I do.”

She continues: “For the musical nuances, it’s listening that’s important: the key is to match the sound and flow. If the nuance reveals a kind of attitude, it’s partly due to the songwriting and partly due to Honey-B.”

Released in April this year, “Astroboy” was co-written by Brian Lee, co-writer of two tracks on Lady Gaga’s Born This Way. All nine of FEMM’s original releases to date have been penned by a high-powered team of producers and pop artists from the U.S., Europe and Australia, then mastered in New York by an engineer whose clients include Beyoncé, Adele, Taylor Swift and One Direction. 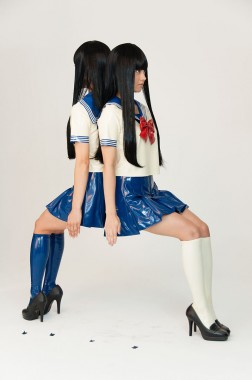 From the all-English lyrics to their attitude and musical style, everything about FEMM broadcasts that their target isn’t Japanese, but global. Yet publicity has been kept to a minimum, and aside from sporadic mannequin-walking appearances around Tokyo, word has spread almost entirely online.

It was the single “Fxxk Boyz Get Money”— uploaded to YouTube on June 26—that projected FEMM onto the global radar. Honey-B attributes the track’s popularity to its strong message, as well as its embrace of a recent dance craze: “This song is for twerking, and it’s really hot right now—this twerking dance style,” she says. “So we thought to have FEMM try these moves.”

Asked about the two possible interpretations of the track’s audacious title, W-Trouble only laughs. “We’ll leave it up to you to decide which it is,” she says.

Honey-B and W-Trouble claim to represent the Far East Mention Mannequin’s Agency Syndicate, an underground society aiming to “send out the message to all the mannequins and dolls in the world.”

What that message is isn’t exactly clear, but there is indeed something subversive here. FEMM holds a funhouse mirror to the doll-like kawaii archetype of Japanese women, reflecting back a pair of hyper-aggressive mannequins who blast through the glass with a subwoofer-stoked wave of female empowerment. 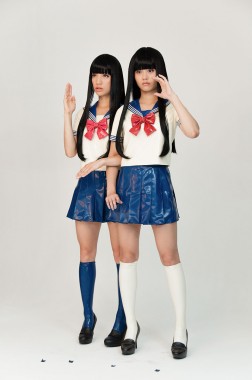 “We look up to all artists in the world who have girl power,” Honey-B says. “This is one of the themes for FEMM: for girls to be strong and powerful.” Her surrogate, RiRi, is billed as a “combat mannequin”—and LuLa, while characterized as a healer, has been known to sport a sizeable assault rifle.

After amassing more than 1 million online video views, FEMM have finally announced their first full album: the 13-track Femm-Isation, to be released October 1 (¥2,200). The album caps months of anticipation, as videos have been uploaded monthly beginning February this year, and recently accelerated to biweekly.

“The mannequins have a hard schedule over a month, and maybe they learn five, six songs,” says Honey-B. Asked to confirm the existence of a cache of new tracks, she promises confidently, “We have more.”

“We hope you’re looking forward to them!” W-Trouble chimes in.

Claiming a catchphrase that encapsulates everything about the duo’s style, Honey-B adds triumphantly, “Right in your face!”

STEREOGIRL Is All Grown Up

A Star is Born

And a director, too