Battle of the Sexes

In 1973, Bobby Riggs, a tennis Hall of Famer, sexist extraordinaire and serial hustler, challenged Billie Jean King, the reigning women’s champion, to a match that would, he claimed, prove once and for all men’s superiority over women. He lost.

The glitzy, chauvinist-vs-feminist match, played in the Houston Astrodome, was one of the most-watched televised sporting events of all time. But it’s only partly what this fine movie is about. The real drama is in the off-court backstories.

Riggs, a shameless, loudmouth showman, was having gambling addiction problems, his wife had thrown him out, and he was compelled to revive his past glories. King, already campaigning for women’s sports parity, was just beginning to realize that she was gay. The event also energized the period’s nascent feminist movement. 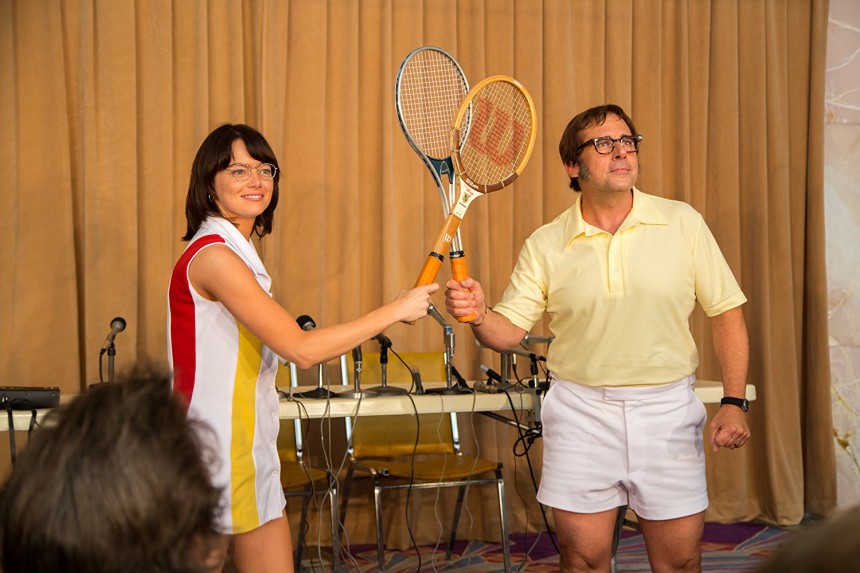 It’s superbly acted. Steve Carell pulls out all the stops in his depiction (impersonation?) of the manic hustler, and Emma Stone disappears into her role as King, whom she eerily resembles. Add to that Elisabeth Shue as Riggs’s wife, a surprisingly effective Sarah Silverman as King’s agent, and the versatile Andrea Riseborough as her lover, and you’ve got game, set and match.

Directed with their trademark light-yet-serious touch by Jonathan Dayton and Valerie Faris, who previously gave us Little Miss Sunshine.

This is a highly entertaining time-capsule comedy, an observant character study, and an inspirational sports flick that manages to slip in a serious message about still relevant themes.

Food for thought about food