It’s been two days since a homecoming show that saw Brooklyn trio Battles pack the house at New York’s Webster Hall. Notwithstanding their nerdy appearance, and all the gadgetry and loops Ian Williams, Dave Konopka, and John Stanier employ, it was at heart a sweaty rock concert.

“I like to place our music in that context,” Williams affirms from his Brooklyn apartment. “A lot of rock purists would probably say it’s not, but I think of it as a stretched-out form of rock.”

Williams and Konopka’s layered instrumental loops, anchored by Stanier’s brutally simple drums, don’t follow traditional blues-based rock patterns, nor do they have vocals. But in the intensity of the trio’s chemistry and gritty amalgam of guitar, bass, and drums, it’s rock. 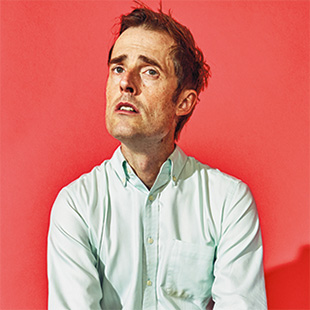 Many have, perhaps not mistakenly, called it “math rock.”

“The term ‘math rock’ was almost a joke when I started out in the ’90s, because you had to count your odd time signatures out,” Williams recalls of the progressive post-punk scene of the era. “When Battles began, we got that tag right away, which always felt funny because we were more pulse-based. You can bob your head to our music; it’s got a flow. So to me, our music was not math rock. But for kids using that phrase, it seemed to mean something different—like you’re in math class. If math is about patterns, then it suits the pattern games in our music.”

Call it what you will. Over the course of a decade, Battles has found a receptive audience worldwide. After speaking to Metropolis, Williams will head to the airport for a series of European dates. Then the band is off to Asia.

“This time, we have four shows in China as well as South Korea and India for the first time,” he says, sounding surprised himself. “When we toured [first album] Mirrored in Kuala Lumpur, there were people who told us they’d flown in from the Philippines and Indonesia to see us—it blew my mind. I wonder if there’s something about the non-lyric aspect of our music that brings non-English speakers to us.”

The current tour sees Battles supporting their third proper album La Di Da Di. After working with vocalists on some tracks for their second disc, Gloss Drop, the trio pared things back to their essential elements. “The last one came out in 2011, and then we toured for a year and a half,” Williams says of the album’s genesis. “Then, after the the shows, it was almost 2013. We generated a lot of raw loops and riffs and things that would suggest the direction of a song, which we traded back and forth and tried to build on. By the time we were done, it was late February this year.

“There’s a logic that we’d be a more successful band if we released music more frequently, because four years is a long time in popular music. But at the same time, [if] it’s the sort of music you’re into, then you’ll wait for it. You’ll still remember us in four years.”

During the New York show, Konopka observed that there are women in the audience, something he lamented was lacking at their shows across North America. “I think if we had more of a vocal component, we might attract more women,” Williams muses. “We definitely attract a strong audience of dudes in bands. A lot of our audience tends to be the 100 local bands—just ’cause bands are mostly guys. I wish there were more girls, and I don’t understand it personally.”

It’s a scene that’s replicated in Japan, where Battles’ audience seems to lean heavily toward ongaku otaku (or Japanese music geeks). But when Williams returns home these days, however, there are women awaiting him: his wife and a 15-month-old baby girl. “I have a daughter now, so that’s new for me,” he says of balancing adult parental responsibilities with the never-grow-old rock ‘n’ roll lifestyle. “It’s tricky. She comes to soundcheck … but the shows are too late.”

While missing his family, the demands of life on the road seem to grow more acceptable to Williams as he ages. “The older you get, the more you appreciate it,” he says, citing the old proverb that youth is wasted on the young.

“When I was in my 20s, with my former band, I was too crazy and it was sort of a strange hell,” he observes. “Now I’m like, this is OK. You have to get up early in the morning, but it’s fine. You get a chance to play music and have people appreciate it. It’s wonderful.”