Collectivity in the City

Shibaura House opens its doors to the community.

The concept of collectivity isn’t new. Working as a team and sharing information— it’s been a part of human experience since time immemorial.

In the last century, theatre groups, such as Ariane Mnouchkine’s Le Théâtre du Soleil, (based in Paris) and New York’s Wooster Group, and architectural communities, such as Archigram and Assemble, have been leading the way in terms of collective creation and communal experience. 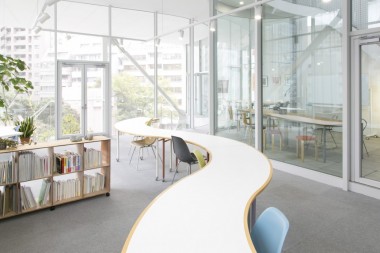 Shibaura House, located in the Tamachi area of Tokyo, is taking the concept of community to the next level.

Recently, the notion of shared and communal work spaces has become more prevalent. Long gone are the days of dreary, drab and uninspiring working environments. This century has seen the dramatic rise of transformable work spaces and structures which encourage community between workers, organizations and the body politic.

Tokyo has been relatively late to embrace collective work spaces. In recent years, locations such as Ryozan Park (in Otsuka and Sugamo) and Stock (in Takanawa) have broken down these barriers in order to welcome collectivity. Event rooms, shared offices, hot desks, recreation rooms, artists’ apartments and rooftop areas for leisure and entertainment activities are all part of the new way of considering working and private lives.

Shibaura House, located in the Tamachi area of Tokyo, is taking the concept of community to the next level. Having celebrated its 6th anniversary earlier this year, Shibaura is branching out, making the space a genuine destination for local people and the international community. It’s based around the idea of reciprocity — people using the space and then giving back to the community by giving talks and lectures, organizing events and generally raising the bar of communal behavior to create a harmonious, creative environment.

From December, Shibaura House is introducing the “Relations” project, which is a concept centered around a space (on the house’s third floor) where people can become in-house “residents” of the building. Utilizing the existing network and formulating new relationships, residents help disseminate the idea of Shibaura House beyond the walls of the physical building. Residents will, in turn, play an active role in the formulation of the community. They are encouraged to create and engage in events with the public on the fifth floor event space, and regularly collaborate with members of the community. 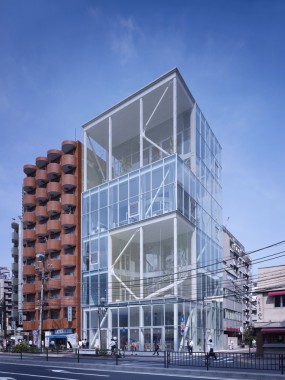 An article published in 2015 in Harvard Business Review illuminates this concept: “coworking spaces consist of members who work for a range of different companies, ventures and projects. Because there is little direct competition or internal politics, they don’t feel they have to put on a work persona to fit in. Working amidst people doing different kinds of work can also make one’s own work-identity stronger. Meaning also comes from working in a culture where it is the norm to help each other out, and there are many opportunities to do so. The variety of workers in the space means that coworkers have unique skill sets that they can provide to other community members.”

Shibaura House is a visually and structurally remarkable space designed by award-winning architect Kazuyo Sejima (co-founder of SANAA) with structural engineering by Mutsuro Sasaki. Illuminated by natural light, the structure is based around a staircase which provides a sense of continuity and openness. The first floor is radical in that local parents, business people and creatives intermingle and make use of the facilities (including free wi-fi) without charge. Coffee and food are available and guests are encouraged to talk to each other and forge bonds, which creates an atmosphere unseen anywhere else in the capital.

Shibaura House provides several in-house activities and programs such as an architectural tour of the building in English and Japanese, a kids’ English program, lunchtime English classes and an English Bar event. It also organizes events such as contemporary dance and theater performances, exhibitions, symposiums and talk events in addition to a recent collaborative project with the Dutch embassy titled “nl/minato.” The venture focused on the three themes of LGBT, Gender and Media with the aim of becoming “a guide for people who are interested in the intersection of these three themes…and to make a place where communities can speak freely regardless of their expertise.”

Shibaura House, a solid structure from the outside, is constantly shifting direction and progressing from the inside. New work spaces, more events and an unfeigned desire to cultivate harmony, happiness and community between people from a myriad of backgrounds exudes throughout the space. Perhaps Shibaura House takes inspiration and vision from Goethe’s assertion that “the world is so empty if one thinks only of mountains, rivers and cities; but to know someone who thinks and feels with us, and who, though distant, is close to us in spirit, this makes the earth for us an inhabited garden.” 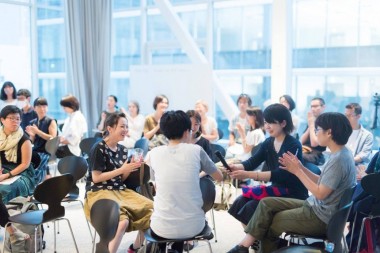