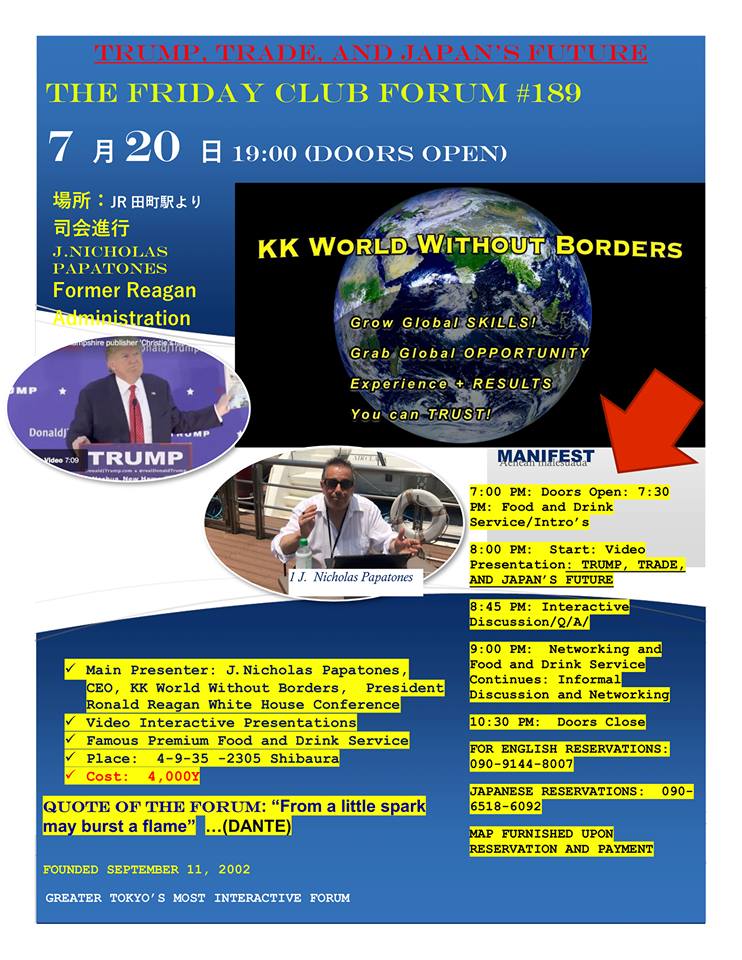 The 189th Friday Club Forum will be Tokyo’s Most Interactive Forum!! Boutique Food and drink and a breathtaking 23rd Floor View of Odaiba and Tokyo Bay Await you. The subject “Trump, Trade and Japan’s Future” focuses on questions many Japanese and Global Businesspeople alike are asking!!  Trump’s win shocked the American Media, the Japanese Media, and the Abe Administration as well as the vast majority of Democrats in the United States.

However, this speaker predicted a Republican victory continually during 2015 in 2016 right up to the Election.  Since he has addressed many forums from International Groups to Chambers of Commerce and many more. J. Nicholas Papatones served as the youngest member of the White House Conference for Small Business under President Reagan. As a college student, he is also  youngest delegate to the Republican National Convention under President elect Nixon and an ABC Correspondent.

Finally he was the youngest Republican City Chairman in his community in the USA! At that time Hillary Clinton was just getting her start in politics out of college no more than five years.  So he offers a unique on both the Victory of Trump and its likely effects. As a Negotiation Consultant and Global Business Consultant here in Tokyo with approximately twenty four years of experience in Japan he also offers a unique political and social dynamics America is now in the midst of and the divisions America now faces.