A crack in the Earth, motions in the sky 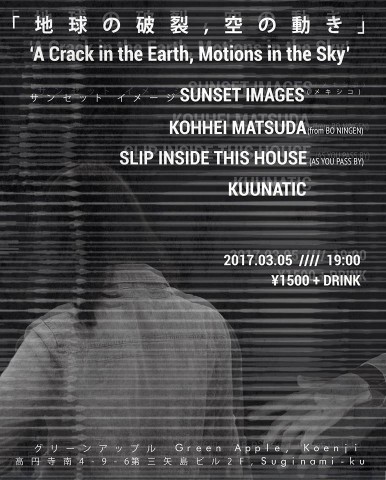 Kohhei Matsuda (from BO NINGEN) and Slip Inside this House (as you pass by) will be cracking up the Earth’s surface with their lacerating sound. While Sunset Images and KUUNATIC will be creating static with their layered experimental music.

Line up:
Sunset Images (all the way from Mexico)
www.sunsetimages.bandcamp.com

Sunset Images is an experimental shoegaze duo, from Mexico City. Their sound is immersive, explosive and full of layers, their live show can transport the listener to a different place without even leaving the room. A duo that sounds like a five piece band, thanks to the use of live-looping of guitar and bass, plus, heavy drums and sequences. The band is heavily influenced by the 90’s, psychedelic music and landscapes.

Slip Inside this House (as you pass by)
Slip inside this house is New band and duo, Niyan (ex-screaming tea party ) and Robin (ex HILU). Sounds like a Steve Reich meets Melt Banana with Brian Wilson in the Abandoned amusement park.


Kuunatic is an experimental rock band, without guitar. Members are all female from Japan and Venezuela and with very diverse music background. Each song is the result of the explorations they made in various music genres from different parts of the world. Their sound can be eerie, melancholic, and somehow primitive.