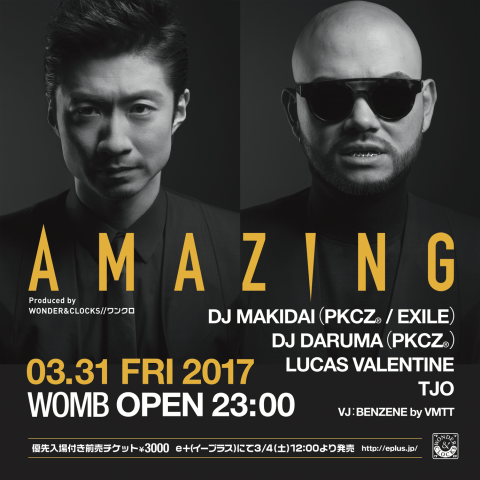 Finally, DJ MAKIDAI and DJ DARUMA are coming back to WOMB! While celebrating their return to DJing, let’s show them an amazing time! Because of an accident late last year, they put on hold the solo activities and also as PKCZ®. After making their long-awaited return to action, DJ MAKIDAI（EXILE / PKCZ®）and DJ DARUMA（PKCZ®）will finally make their return to WOMB. The event will be held to replace the event that had been planned for January of this year, and the two of them will be celebrating their return with friends such as LUCAS VALENTINE and TJO, and will be presenting the crowd with “amazing sounds”. As we near the return of PKCZ® with VERBAL, DJ MAKIDAI and DJ DARUME will appear first to reveal an energetic performance.
MUSIC: ALLMIX,BASS MUSIC,HIP HOP,TRAP