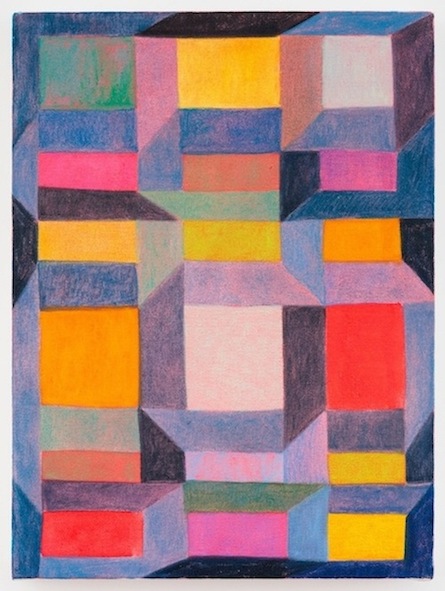 Hiromart Gallery is pleased to present Three Forks, an exhibition of paintings by Christopher Dunlap, a New York City based American Artist.
This is his debut exhibition in Japan, which features his most recent works of geometric abstract paintings.

Christopher Dunlap’s paintings engage the viewer through a playful, disruptive exploration of color and pattern. These forms create a multiplicity of relationships between simple shapes and complex structures. Through specific placement, repetition, and implied perspective, the paintings assert a sense of depth. By creating an image that can register spatially in multiple ways, the paintings draw the viewer to a heightened awareness of their own visual processes. This sustained attention seeks to bridge a gap between perception and sensation.
Dunlap cites his mother’s quilting as an early influence. Like quilting, his paintings also combine small colorful elements that unite to create a complex image.  Similarly, game boards and maps, which have their own dialectics and visual language, find their way into his paintings. His work does more than just reveal thoughts; it’s a method of thinking itself, one that operates on its own oneiric logic.