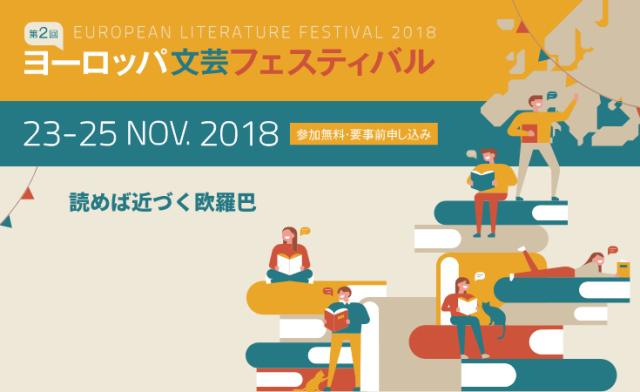 Organised by the Delegation of the European Union to Japan in partnership with EU Member State embassies and cultural institutes in Japan, European Literature Festival 2018 aims to bring European literature closer to the Japanese public.

Following a successful pilot last year, this year’s three day festival features lectures, dialogues, and panel discussions that reflect on European literature from such perspectives as ‘art of translation’, ‘literature and gender’ and ‘living in Japan, writing about Japan’.

Highlights will include four previous winners of the European Union Prize for Literature (EUPL) participating in a special session at the EU Delegation on November 23 and a reading by Irish poet Kevin Barry at HMV & Books Shibuya on November 24.

Entrance is free but prior registration is recommended. Most events will have English and Japanese simultaneous interpretation, with other European languages available at some events. Please see the EU Lit Fest 2018 schedule for more details.