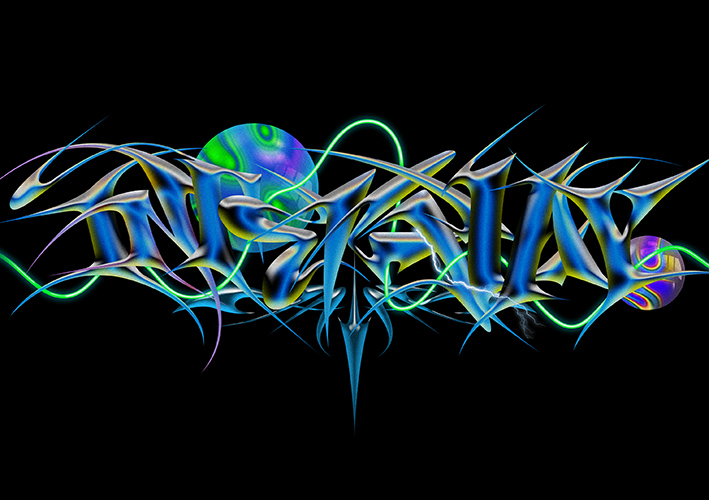 Through social media such Tumblr and Instagram, commercial designer, GUCCIMAZE published a lot of his graphics, lettering and typography and drew attention of apparel brands and creative directors worldwide. He also worked for hip-hop artists like Fetty Wap and Post Malone.  In 2018, he created the cover design for Nicki Minaj’s album Queen, which saw such a huge buzz and press in Japan. He then went on to work with Flying Lotus for his album Flamagra and collaborated with global companies such as Red Bull, Budweiser and Adidas. GUCCIMAZE ‘s renowned metallic, three-dimensional typography of Chrome Type is now established as a new style of expression and he is attracting worldwide attention as a driving force behind the Acid Graphics trend.

GUCCIMAZE has created a whirlwind in the graphic design industry by luring viewers into his mystifying world. His artwork is characterized by sharp line lettering, dynamic typography, and an eccentric, venomous color scheme that sets it apart from orthodox graphic design. The origin of his work lies in his attraction to “evil” ever since he was a child, the hip-hop and graffiti that he was obsessed with in his youth, and the fashion associated later on in the DJ and music scene. His distinctive style was established by rooting himself in the culture early on—influencing his output over time.

The exhibition will feature graphic and apparel works created over the past three years, as well as new works created for this exhibition.
Especially of note are collaborations with up-and-coming creators in various fields. Sculptor KOTARO YAMADA and illustrator Takuya Kamioka took part in the project, breaking GUCCIMAZE’s work beyond flat surfaces and into the third dimension. By combining their respective identities, it opened up new possibilities of expression.
There will also be other three-dimensional works such as neon tube art, and a giant visual that floats in AR (augmented reality). You can experience a variety of expressions that are not just limited to posters.

During the exhibition, more than 20 works of art, both new and from the past, will be available for sale, as well as related merchandise such as T-shirts, stickers, and art books.(Scheduled to be released in early August.)