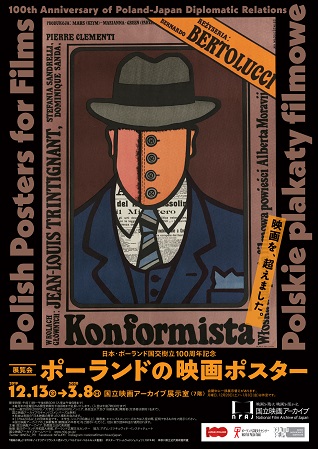 Late 1800s and early 1900s was a time when Japan established diplomatic relations with many of the northern European countries. To commemorate the various anniversaries of the relationships to Denmark, Sweden, Finland and Austria, National Museum of Western Art and University of Tokyo among other have been, and are, active in curating exhibitions and events celebrating this. Swedish dads taking parental leave, 19th century prominent Finnish female artists, the history of Austrian royalties (until january 26 2020) account for some of the subjects lifted by Japanese art museums and galleries. Next up for commemoration is the bond between Japan and Poland. Due to the 100th anniversary of diplomatic relations, National Film Archive of Japan exhibits 96 cinematic posters by Polish artists. The selection covers not only Poland made cinema but include other European and American movies as well. Among the posters, outstanding designers such as Roman Ceslevich and Jan Mwodjejecze played an active role. By turning the inspiration received from the movie into a free expression full of metaphors their artistry attracted international attention for its unconventional expression.