Blum & Poe is pleased to present Tokyo-based Kenjiro Okazaki’s second solo exhibition, “TOPICA PICTUS Revisited: Forty Red, White, And Blue Shoesstrings And A Thousand Telephone.” In October 2021, Okazaki suddenly fell ill. After more than six months of hospitalization and grueling rehabilitation, Okazaki made an astonishing recovery and began painting again. It is said that this series of experiences gave the artist new ideas about the relationships that exist between the body, mind, and the world, and also gave him a new perspective on the significance of art production. In this exhibition, many of the latest works that he has been working on since leaving the hospital will be exhibited for the first time. 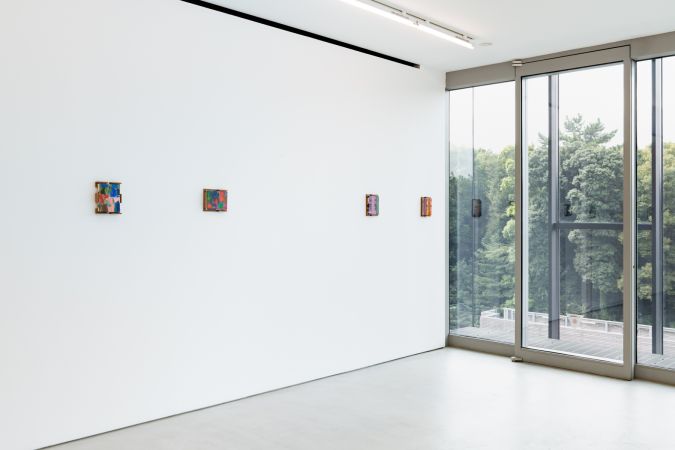 Tokyo, Japan, September XX, 2022—Blum & Poe is pleased to present TOPICA PICTUS Revisited: Forty Red, White, And Blue Shoestrings And A Thousand Telephones, Tokyo-based artist Kenjirō Okazaki’s second solo presentation with the gallery. In October of 2021, Okazaki suffered a severe stroke. After more than six months of hospitalization and rigorous rehabilitation, his body and mind made a remarkable recovery, allowing him to resume painting—something that was predicted to be impossible early on in his convalescence. This experience led Okazaki to rediscover the relationship between the body, the mind, and the world. It also gave him a new perspective on the significance of artistic creation. This exhibition will be the first displaying new work by the artist since his discharge from the hospital.

There was no going back—that is what I thought. I would never paint or write again. Unable to use my dominant hand or leg, I couldn’t open my palm to grip anything, stand still, or sit by the edge of the bed. As I said goodbye to my former self, I felt sadness and pain. Yet, I also felt fine, even exhilarated. I parted from my former self (the place I was not able to leave behind)—but where did I end up?

The circuits in the brain create an expansive network. Since these circuits are located in different parts of the brain, with built-in redundancies and layers, it is difficult to draw this three-dimensional network as a two- dimensional diagram (something like a map). Spacetime cannot be captured, even in the fourth dimension, when the brain’s network is explored.

The blow (stroke) created a hole in this network. The hole was three-dimensional (merely physical) damage, yet the extent of its impact on the brain could not be measured by its projection onto a three-dimensional image. That is because there should have already been a void within different phase spaces between the circuits within different phase spaces.

Ten months of convoluted (and compacted) spacetime have passed. My right hand is now painting, typing, and writing. It does not feel like my former self is returning. But as my right-hand paints and writes, it feels as if this body is revisiting a place someone else had once visited. – Kenjirō Okazaki

TOPICA PICTUS takes its name, firstly, from topos, a rhetorical device that Aristotle deployed to describe a source or place from which a speaker may locate their argument. Secondly, the name is taken from the Latin word pictus, which means “painted.” Okazaki uses his small-scale, abstract paintings as the containing factor, a topos, to loosely suggest his influences and present them alongside one another. In TOPICA PICTUS Revisited: Forty Red, White, And Blue Shoestrings And A Thousand Telephones, the artist unites under a topos his encounter with becoming defamiliarized from his physicality—recorded and presented here through the act of painting—with references in the works’ titles to concepts such as Bob Dylan’s “Highway 61 Revisited,” Polish folklore, or 黙示 , the Japanese word for “revelation.”

1990s Okazaki has wielded great influence within and beyond the field of art. His publication Renaissance: Condition of Experience (Chikuma Shobō, 2001/Bungeishunjū Gakugei Library, 2014) was praised by critic and curator Akira Asada as “the birth of the historical text.” A revered professor, he founded and directed the Yotsuya Art Studium in 2004, a base for new educational and creative activities. In 2014 he received Smithsonian Artist Research Fellowship (SARF) at the Hirshhorn Museum and Sculpture Garden. In 2019 he won the Ministry of Education Award in Fine Arts for his publication Abstract Art As Impact: Analysis of Modern Art (Aki Shobō, 2018). He is currently a visiting professor at Musashino Art University and University of Tokyo.