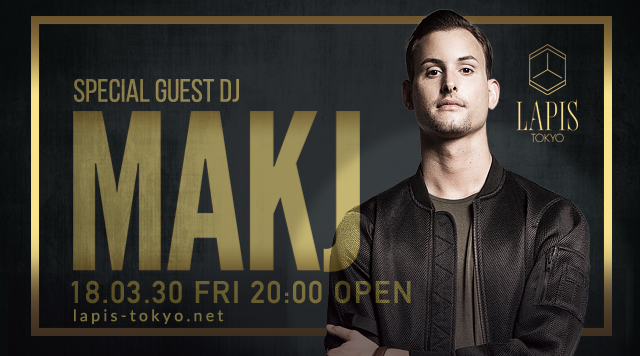 Coming at the end of March will be world-famous DJ MAKJ, performing live at Lapis Tokyo! Located in the heart of Ginza, the newly opened dance club Lapis Tokyo is a step into a dark hypnotic wonderland. Its fusion of deep-sea colors along with eccentric pieces of wall art make for the perfect scene to dance and listen to one of the world’s most talented vinyl scratchers, DJ MAKJ.

At the early age of 15, Mackenzie Johnson (better known for his stage name MAKJ) was living in China and pursuing a career in pro race-car driving, when an interest in DJing changed his fate. Returning to his home country in the United States 2 years later, MAKJ has performed at local events until his name popularized as one of the best DJs of this generation. He traveled the country with bands Bingo Players and Bassjackers in 2013, and eventually made it to Billboard’s Top 10 Artists to Watch at Ultra Music Festival in 2014. Now hosting the radio show Revolution Radio on Clear Channel’s Evolution channel, MAKJ has shown the world that his talents and horizons are limitless.