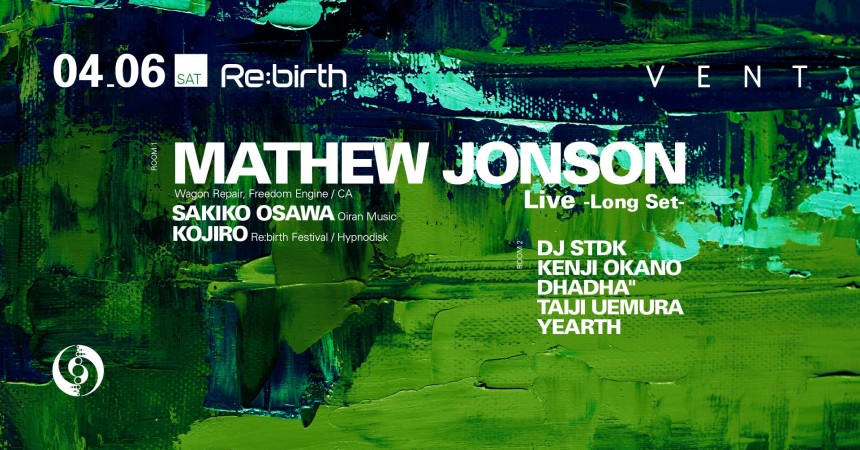 When it comes to live electronic music, Mathew Jonson is the total package!

With genius mind for music and unparalleled passion for performing live to back him, he’s enchanted many an audience here in Japan. And now, the highly talented Mathew Jonson will be taking the stage to grace us with an extra special, long-set at Re:birth, to be held on April 6th, only at VENT!

As a minimal/techno pioneer, Mathew sent tremors throughout the scene with his freestyle, techno jam band “Cobblestone Jazz”. Since his 2001 debut, Itiswhatitis, he’s gone on to deliver multiple hit singles from highly exalted labels like Perlon, Minus, and Kompakt, in 2015 he set up his own label, Wagon Repair. He’s received acclaim for his tracks from notable artists such as Richie Hawtin, Laurent Garnier, and Gilles Peterson, and has lent his talents as a remixer for big acts like The Chemical Brothers, Moby, Four Tet, and Plastikman.

2015’s “fabric 84” was ranked number 2 on Resident Advisor’s “Top 10 Official Mixes”. Furthermore, Mathew Jonson was ranked number 1 on Resident Advisor’s “Top 20 LIVE Acts” for 6 years in a row, starting from 2011, due to his highly lauded improvised live performances that incorporated both computers and analog gear. He’s also performed a loads of top festivals and events here in Japan, such as The Labyrinth, Rainbow Disco Club, The Star Festival, Red Bull Music Academy Tokyo, and MUTEK Japan.

So do not miss out on this opportunity to take in the genius that is the total package of the live electronic scene!