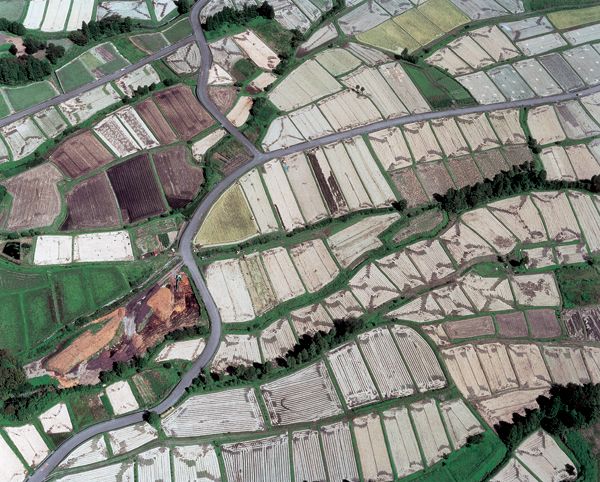 Matsue Taiji (born in Tokyo in 1963) takes a unique perspective in his photography, capturing the earth’s surface all over the world. When shooting, Matsue excludes the horizon line and the sky, making use of direct light to prevent any shadows from being cast and creating a flat quality in his aerial images. In this exhibition, we introduce two of Matsue’s ongoing series including a number of new works.

As the title CC (an abbreviation for “city code”) suggests, each of the works in the series, which Matsue began in 2001, bears the code of the place where the picture was taken. The series, which starts in Athens, Greece, faithfully depicts various aspects of the cities, located in a wide range of countries, that the artist visited. By focusing on the entire picture plane, Matsue eliminates depth and equalizes everything in the photograph.

The works in makieta, a series Matsue began in 2007, also bear a city code and place name. The title means “model” in Polish, and the photographs depict models of cities and topographies all over the world based on the same rules that Matsue uses when shooting an actual city or natural environment. A model in a museum in Quito, Ecuador served as the starting point for the series, in which the landscapes that emerge from the models when seen through the camera lens appear so elaborate that they could easily be mistaken for the real thing. It is this ambiguity that underscores the essential nature of photography.

This exhibition, which also includes new works, presents a snapshot of Matsue’s career to date and the power of his form of expression.