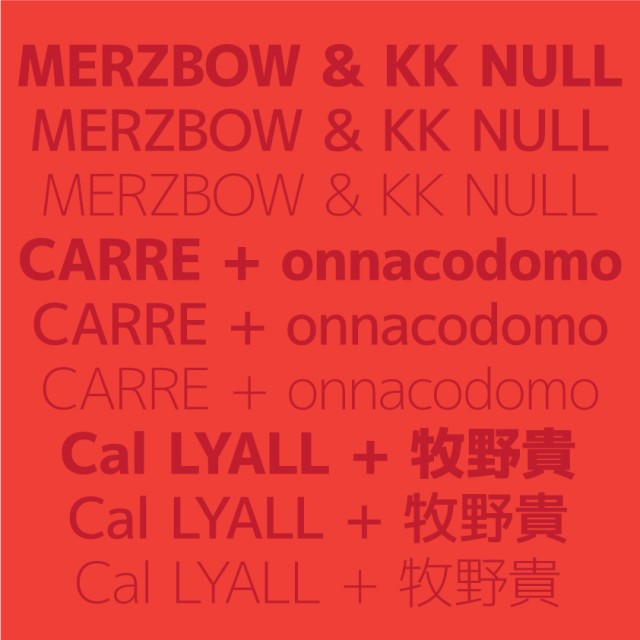 A one night only event on September 15th at SuperDeluxe. Artists MERZBOW & KK NULL, CARRE + onnacodomo, and Cal Lyall + Makino Takashi will all be performing.

This event is No Smoking

KK NULL
(real name : KAZUYUKI KISHINO) was born in Tokyo, Japan. Composer, guitarist, singer, mastermind of progressive hardcore band ZENI GEVA (releasing five albums produced by STEVE ALBINI and a few more on other labels such as NEUROSIS’s Neurot Recordings. One of the top names in Japanese noise music and in a larger context, one of the great cult artists in experimental music since the early 80’s. All the while, KK NULL has worked on his solo career and collaborated with other musical innovators and has been invited to perform at countless international festivals. After playing the guitar as his main instrument for nearly thirty years, KK NULL has gradually moved towards a more electronic approach. Since the late 90’s he has concentrated his efforts on his solo & collaborative recordings, exploring the outer territories of electronica, creating intense clashing wave of noise, structured electro-acoustic ambience, broken down rhythmics, scattered pitch sculptures, droning isolationist material which could be described “cosmic noise maximal/minimalism”

CARRE
Purveyors of self-styled 21st century industrial music, CARRE has been creating dense, rhythmic urban sound in Japan for close to a decade. With NAG on rhythm machine, bass machine and synthesizer, and MTR on rhythm box, oscillator and guitar, the duo traverses an aural universe of collapsing beats and undulating melodies, leaving you with the feeling that you may have just experienced a (somewhat pleasant) alien abduction.

onnacodomo
DJ Codomo + Yasuko Seki + Ruka Noguchi. onnacodomo formed in 2004 for VJing a Japanese girl’s rock duo named Kiiiiiii. They had two solo exhibitions in Tokyo in 2004 and 2012, and joined “Tokyo Crazy Kawaii” held in Paris in 2013. Onnacodomo played shows at “Detour” in Hong Kong in 2010, and “Kirin Big in Japan” in Australia in 2011. They VJ for Buffalo Daughter at Fuji Rock Festival in 2011, and recently played with Ryan Hemsworth at Coachella 2015.

Cal Lyall
Involved in the arts scene in Japan for over fifteen years, Cal Lyall has organized large-scale performances involving both Japanese and overseas artists, while also remaining a key member of a number of musical groups which have toured both locally and internationally. His musical activities are documented on over 30 albums he has both produced (including three full-length compilations released on medama records in Japan) and contributed to as a writer or musician. As a curator, he established the monthly Test Tone concert series in 2005 at Tokyo’s SuperDeluxe. Featuring over a thousand distinct artists over its 9 year run, it reached its 100th installment in 2014. With an active performance schedule in Japan and past tours through Thailand, Laos, Indonesia, China, Korea, Australia and the US, he also heads up the Subvalent record label and oversees the Tokyo Hub of Jolt Sonic Arts (Australia).

Makino Takashi
Makino Takashi (1978, Japan) is an artist and makes experimental films. He was educated in Cinematography at the Nihon University College of Art in Japan. In 2001, he served an apprenticeship with the Quay Brothers in London, during which he mainly studied film music and lighting. Elements of Nothing (2008) and Generator (2012) have been selected for IFFR’s Tiger Competition for Short Films and with Generator Makino won a Tiger Award. Since then, his films have been invited for screenings at numerous film and video art festivals worldwide.