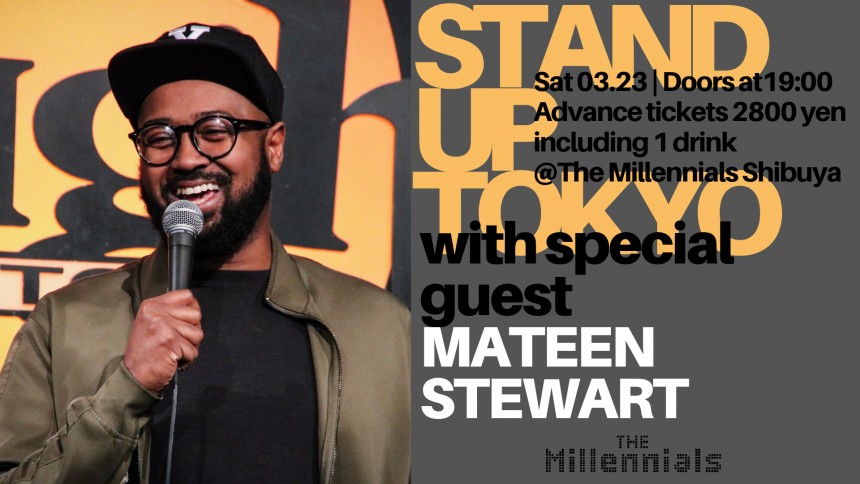 The best new comedy show at the hottest new event space in Shibuya is presenting our first International Headliner, Mateen Stewart from LA!

Looking for an awesome stand up comedy show in the heart of Shibuya, featuring the best local and international comedians at a brand new futuristic venue? STAND UP TOKYO x The MILLENNIALS have got you covered.

Our latest international headliner Mateen Stewart is already a highly-regarded comic in the Los Angeles comedy scene and now he’s ready to take his message to the masses. Originally from Detroit, he attended Florida A&M University where he majored in Theatre. Mateen has appeared in several on-screen roles with the likes of Ben Stiller, Ken Marino and Ron Hubel. He has been featured in a National McDonalds commercial and has also appeared on Jimmy Kimmel Live!, Last Week Tonight and HGTV.

Here’s a clip of Mateen at the world-famous Laugh Factory which all the kindergarten teachers in the audience will identify with: https://youtu.be/mCZUtY7oBYs

Plus local support acts and MC

This comedy show Shibuya residents have been waiting for is aimed equally at hostel guests, wandering foreigners looking for a laugh and comedy-hungry Tokyo residents. Anyone is welcome and we have delicious drinkies to whet your whistle and lube up your funny bone. This show is entirely in English and there will be F-ing, Jeff-ing, possible blinding and most definite and frank discussions of loveboxes and pee-pee sticks, so leave your kids at home to do the chores.

After the show ends, we’ll keep it vibing with a DJ playing very non-comedy music, and drinks being sold right up til 11pm.

How much?
It’s only 2800¥ with a drink! 2 hours of great comedy and a bit of a woogie boogie dancey, plus very reasonable drinks (inc craft beers) to buy all night. This comedy show in Shibuya is too good value to pass up! The price is a little higher for international headliner Mateen Stewart but it will be worth it to see him do his thing.

We’ll see you there, you won’t want to miss such a great event in this beautiful space.