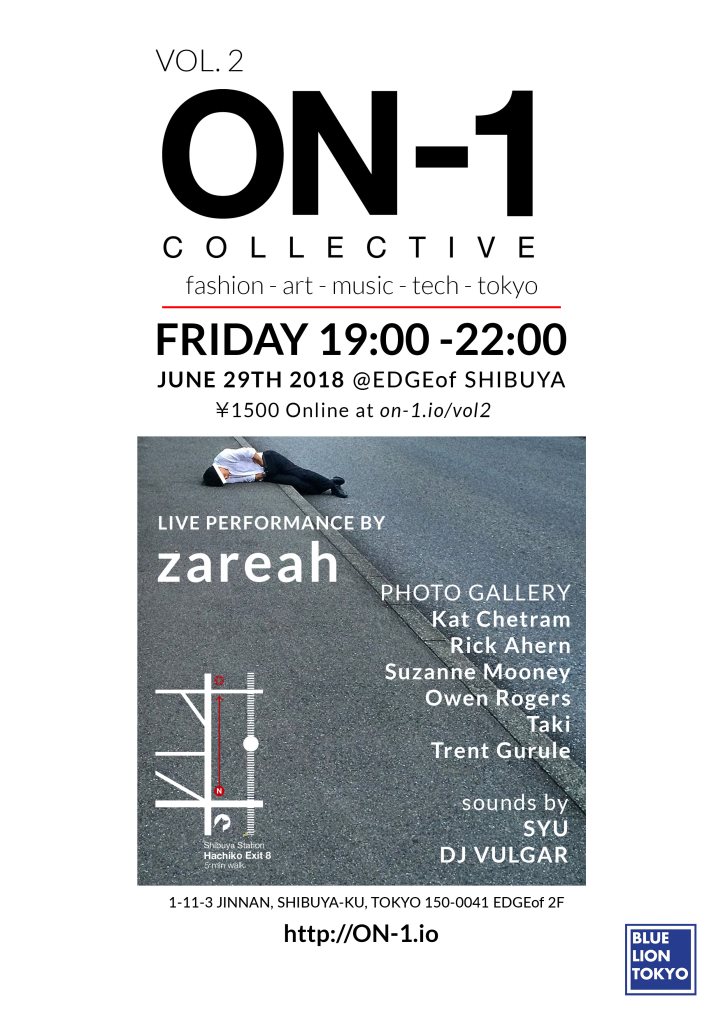 Second installment of the ON-1 collective brining together the coolest creatives in the Fashion, Art and Music worlds. Second installment on the ON-1 series. This time around we will be having a photo gallery showcasing some great street photography and a BLUE LION Tokyo will be taking high quality fashion portraits of guests throughout the event. Music will be provided by SYU and DJ Vulgar featuring an intimate performance from Zareah. Drinks included with admission.

Kat Chetram
@katologs
Photographer, designer, zine maker, explorer and occasional DJ-er, Kat Chetram is a London born, Tokyo based creative. She followed her 2017 zine LOOK SEE with LOOK SEE 2 in 2018 as the photographer took up analogue photography again. This time, the photographer aimed to try and pay homage to the old as the city around her transforms in preparation for the 2020 Olympics

Rick Ahern
@rixrekords
Rick Ahern has been working as a Account Executive in a international advertising agency in Tokyo for the last 4 years and has been living in Japan for 6 years. He connects his experiences with his love of photography and focuses on portraits of friends and local Japanese people he meets.

Suzanne Mooney
@suzannemooney
Suzanne Mooney is an Irish artist currently living in Japan. She graduated with a Masters Degree in Fine Art, Virtual Realities, from the National College of Art and Design, Ireland and is currently the recipient of a Japanese government scholarship and a PhD student at Tama Art University in Tokyo.

Owen Rogers
@iamowenrogers
Founder of TokyoFAM and cofounder of ON-1 Collevtice, Owen is an accomplished photographer and curator. Focusing on music and fashion he moved to Tokyo in 2017 where he continues to capture culture.

Susumu Moritaki
@msusumu
Born in Tokyo, Susumu has made a name for himself has a fashion and lifestyle photographer shooting all over the world. Since he bagan his career 2004 he has traveled all over the world and has published a photobook on his images from Jamaica.

Started off as a singer songwriter in 2017, Zareah is now the vocal of cover band RE:PLY and working with producers from Tokyo and the US as an independent artist. Influenced by old school R&B divas and contemporary R&B neo soul artists, she aspires to combine intimate storytelling and gripping performance together in her music.