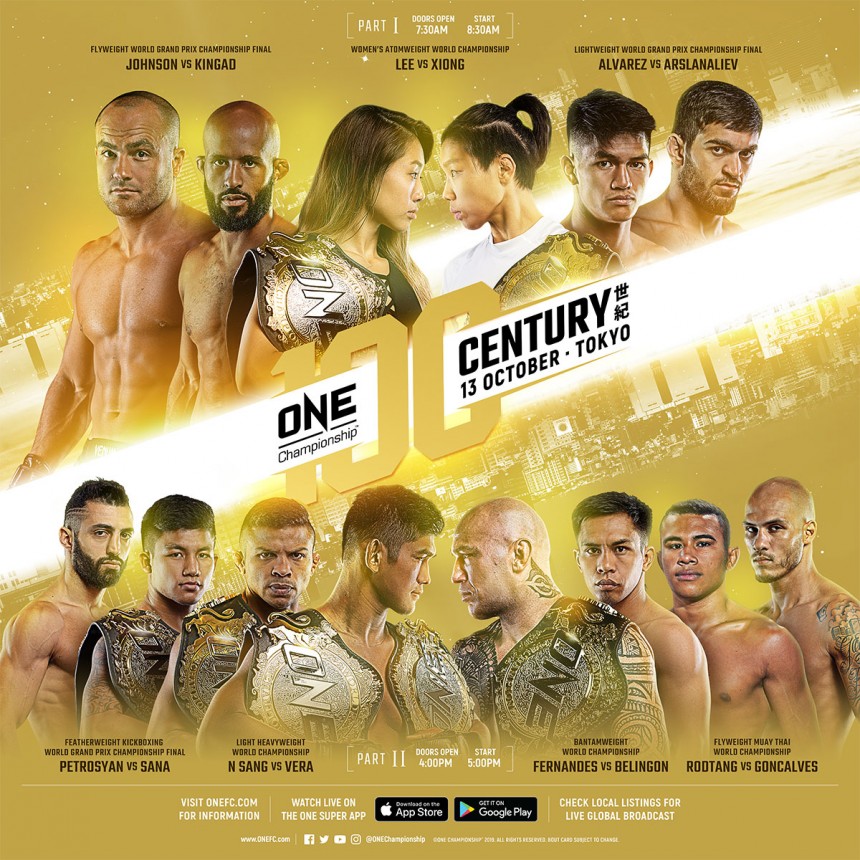 It’s the biggest event in martial arts history, as ONE Championship commemorates its 100th blockbuster show on 13 October with ONE: CENTURY in Tokyo, Japan. It will be a full day of non-stop action, with two stacked cards being hosted on the same day. Featuring a record seven World Title bouts and 27 martial arts World Champions, fans will get to see the very best martial artists on the planet showcase their skills in massive contests.

In the main event of ONE: CENTURY’s first epic event, Angela Lee defends her ONE Atomweight World Title in a rematch against ONE Women’s Strawweight World Champion Xiong Jing Nan. Lee was unable to dethrone Xiong in their first contest, and she faces a tough test to hold on to her crown, as the Chinese superstar will be giving her all to become ONE’s first ever two-division Women’s World Champion.

The epic second card is headlined by two of the biggest bouts the world has ever seen. ONE Heavyweight World Champion Brandon Vera challenges for two-division titleholder Aung La N Sang’s ONE Light Heavyweight World Title, while the greatest rivalry in ONE history comes to a conclusion, with reigning kingpin Bibiano Fernandes facing Kevin Belingon an unprecedented fourth time for the ONE Bantamweight World Title.

The world’s best strikers will also be in action, and the stakes could not be higher. ONE Flyweight Muay Thai World Champion Rodtang Jitmuangnon makes his first World Title defense against Walter Goncalves, and Giorgio Petrosyan faces Samy Sana with US$1 million and the ONE Featherweight Kickboxing World Grand Prix Championship on the line.