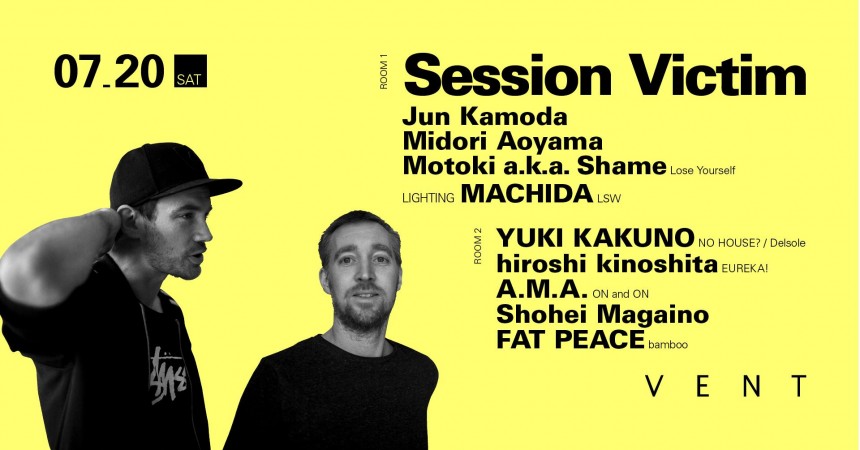 Session Victim will be coming back to Vent on July 20th, one full year on the dot, since their last highly regarded gig here. So brace yourself for yet another epic performance that has been leaving massive impressions and smiles on the faces of audiences all over the globe.

Session Victim are Hauke Freer and Matthias Reiling, and every performance they do are one-of-a-kind, unique experiences. These natural-born crate diggers are self-proclaimed studio nerds who have risen to the status of the most sought after two-piece house units in all of Europe. In the decade since they joined forces, they’ve released 3 albums, which have been lauded as one of the years’ (of release) top albums by Resident Advisor and XLR8R, as well as other publications across the globe. Furthermore, they have played at world-class clubs like Panorama Bar, Fabric, and Cielo, and have displayed some serious performances at Air and Rainbow Disco Club here in Japan.

Hip hop, funk, disco, soul, house, and techno records spanning several decades are part of their collection/musical arsenal. With a wide array of musical genres at their disposal, when they dig out that one rare vinyl caked in dust and throw it on the turntable as part of their set, you can tell it is a source of pride and passion for them – both their DJ sets and productions are filled with these emotions.

When you witness a Session Victim performance, you are whisked away into their world and taken on a journey – they always aim to delivery, their mission is to leave you with a smile on your face. So entrust your mind and body with them for a magical night of impressive grooves and magical wonder on the dance floor.