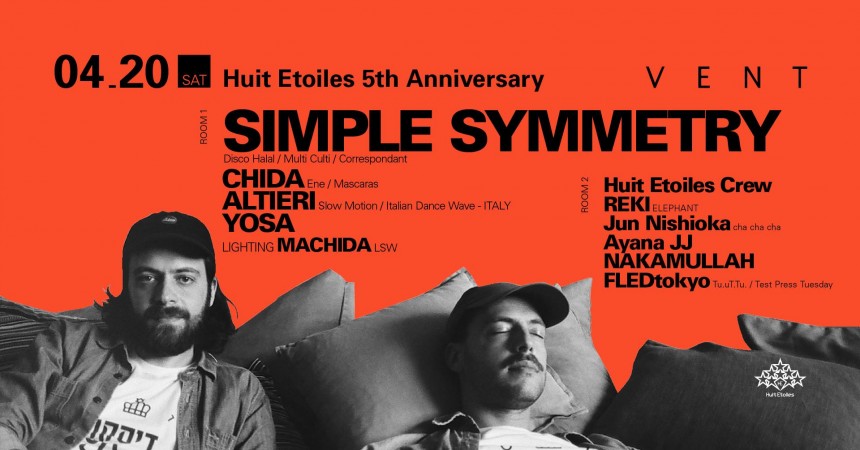 Russian duo of the modern ethnic style, Simple Symmetry, have been getting listeners hooked on their sound, even Dixon and DJ Tennis have admitted to their addiction! Now they will be playing at Huit Etoiles 5-year anniversary party, only at VENT!

Direct from the Russian capital of Moscow, this power duo have release smash hit after smash hit on the Disco Halal print! Super popular within the modern ethnic scene, this brotherly pair will be performing at Huit Etoiles fifth anniversary party on April 20th, at Omotesando VENT!

Recently, Simple Symmetry had been selected to play at Dixon’s Innervisions show in Moscow, as well as DJ Tennis’ Life and Death festival in Barcelona – they’ve been making the rounds! As producers they have a nice lineup of works that have been highly acclaimed – designating Disco Halal as their home label, Simple Symmetry have been refining their style that is both a psychedelic journey and a form melodic Expressionism – their sound encapsulates passion and escapism. Simple Symmetry have dove headlong out of their Moscow basement in search of sounds and music – sonic treasures, if you well – from people and cultures the world over. This auditory adventure that they’ve undertook has taken them to all corners of the globe, and at each destination they capture valuable sounds to incorporate into their floor-shaking tracks!

It’s been 5 whole years since the Huit Etoiles party was established, bringing in talented global artists to play at Japan’s top club, further expanding Japan’s Nu Disco scene – it’s time to celebrate! According to Timeout magazine, Japan’s Nu Disco scene has become an established one, leading the region in this genre. Bringing forth passion for ethnic rhythms, instruments, primitive vibes, and underground dance music, Simple Symmetry’s set will be something to behold – so don’t miss it at Huit Etoiles 5-year anniversary party, only at VENT!