Mountain Streams in Summer and Autumn, by Suzuki Kiitsu (1796-1858) depicts a Japanese cypress grove, streams rushing through the rocky mountain side, with a strong sense of reality yet filled with an eerily mysterious feeling.

Kiitsu had been the leading pupil of Sakai Hōitsu (1761-1828), an Edo-based artist who venerated Ogata Kōrin (1658-1716), who was active in Kyoto a century earlier, and founded the Edo Rimpa school. Not content merely to carry on his master’s style, Kiitsu expressed his individuality by adding a thoroughly realistic mode of expression, a sharp sense of design, and at times fantastic images.

At the heart of Kiitsu’s oeuvre is a masterpiece, his most singular creation, Mountain Streams in Summer and Autumn. This pair of folding screen paintings was the first work by Kiitsu to be designated an Important Cultural Property, in 2020.

This exhibition examines how Kiitsu, while influenced, of course, by Hōitsu and by his studies of Kōrin, also absorbed the styles of artists outside the Rimpa school, including Maruyama Ōkyo, Tani Bunchō, and members of the older Kanō school. He integrated their influences in his work, which continued to be rooted in his realistic perception of nature. Examining those many influences, the exhibition explores the mysteries behind the birth of Mountain Streams in Summer and Autumn. 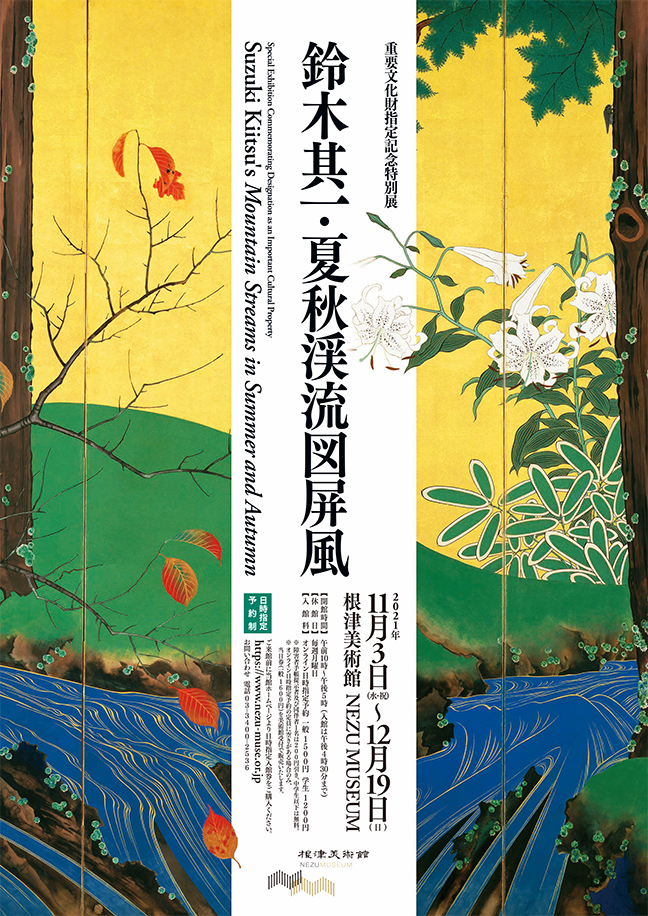