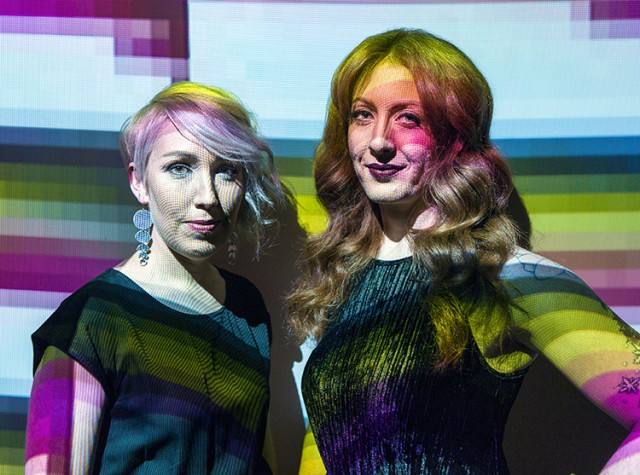 Thin Edge New Music Collective (TENMC) will give the Japanese premiere of Maria de Alvear’s Thinking, a monumental, powerful hour-long multimedia work for violin, piano, and live video. The live video is interwoven with images of the sea off Newfoundland, Canada’s easternmost province. Just a few hundred kilometres over the frigid North Atlantic Ocean from Newfoundland is Iceland, the setting of Daryl Jamieson’s utamakura 2: Arnardalur. It is based on a saga and features video and audio recordings Jamieson made in northwest Iceland. The piece was written for TENMC for this Japan tour. The concert will begin with Kenji Sakai’s Chasm, a high-energy duo of vertiginous intensity.

Supported by Canada Council for the Arts

Thin Edge New Music Collective
Thin Edge New Music Collective (TENMC) is a Toronto-based ensemble dedicated to ingenuity, collaboration, in the programming and performance of contemporary music. Founded in 2011, TENMC has performed on concert stages across Canada, Italy, Poland, and Argentina. In addition to producing a regular concert series, TENMC has commissioned over 60 works from composers across Canada and beyond. Recent collaborations include “Raging Against the Machine” (RATM), a cultural exchange with Montreal-based Ensemble Paramirabo which toured across Canada in 2015 and 2017, coinciding with the release of a joint album on Vancouver-based Redshift Records and ”Balancing on the Edge”(BOTE), a large-scale production integrating theatre, dance, multi-media, new music and new circus, in partnership with ‘A Girl In The Sky Productions.’ Described as “provocative, thrilling and thought-provoking..” (Musicworks) BOTE was presented at Toronto’s 2016 Nuit Blanche festival and in association with Harbourfront Centre’s NextSteps Dance Series (November 2016). Thin Edge has established a reputation as “one of Toronto’s hottest and bravest new music collectives” (Musical Toronto), and “one of the city’s most forward-thinking DIY chamber ensembles“ (Mechanical Forest Sound) and is passionately dedicated to supporting their peers through commissioning and performance, bringing innovative and eclectic 20th and 21st century music to audiences both existing and as yet untapped.
Thin Edge New Music Collective official site

Ilana Waniuk
Ilana Waniuk is a versatile violinist with interests ranging from classical music and improvisation to visual arts. She has held artistic residencies at the Banff centre for the Arts, Avaloch Farms Music Institute, and been a guest artist in residence at the SoundSCAPE festival of contemporary music in Italy. Along with pianist Cheryl Duvall, Ilana is a founding member and co-artistic director of Toronto-based Thin Edge New Music Collective and Balancing on the Edge (multidisciplinary production melding circus arts with new music). Ilana has toured Cape Breton and Ontario as part of the Bicycle Opera Project, and performed at contemporary music festivals across Canada including the University of Calgary’s Happening Festival of New Music and Media, Open Ears Festival and the Royal Conservatory’s 21C Festival. In September, she will begin doctoral studies in contemporary performance at the University of California San Diego. Ilana is a winner of the 2014 Orford String Quartet Award.

Cheryl Duvall
Cheryl Duvall is a multifaceted pianist with a penchant for musical risk taking and adventure and has toured and performed throughout Canada, Europe, Argentina and the U.S. Cheryl’s strong affinity for boundary-pushing and innovative music making led her along with friend and violinist, Ilana Waniuk to co-found the Toronto-based Thin Edge New Music Collective, now in their eighth season. She just celebrated her 11th year as pianist for the internationally renowned, Oakville Choir for Children and Youth. Recently, she was shortlisted as the finalist for the 2016 F.M. Hunter Artist Awards in Music through the Ontario Arts Council and Foundation.

Kenji Sakai
Born in Osaka, Japan. Having studied at Kyoto University of Fine Arts and Music, he respectively studied composition, piano, electronics and analysis at Conservatoire National Supérieur de Paris then Haute Ecole de Musique de Genève and at Ircam. He was a member of the French Academy in Madrid for 2012-2013 then a fellow of the French Academy in Rome (Pensionnaire de la Villa Médicis) for 2015-2016. Helmut Lachenmann described Kenji Sakai’s style that his compositional virtuosity was highly developed in a personal manner in dealing with sound and time, no sterile epicenism, without fear of triviality, but with a lightness and luminosity. His works were premiered by prestigious orchestras, ensembles and soloists : Lyon National Orchestra, Lucerne Symphony Orchestra, National Orchestra of Belgium, NHK Symphony Orchestra, Kyoto Symphony Orchestra, Ensemble Intercontemporain, Joanthan Nott, Jonathan Stockhammer, Norichika Iimori, Tatsuya Shimono, Momo Kodama, Tatsuki Narita, Mami Hagiwara and so on, performed in well-known festivals, at concert halls among Europe, Japan and North America. He wrote “Blue Concerto” for Yomiuri Nippon Symphony Orchestra’s European tour conducted by Sylvain Cambreling and “Spiral in Blue” for Les Vents Français’ Japan tour. His portrait concerts were held in various cities in Europe and Japan and in February 2017 he will be invited to Music From Japan presenting his portrait concert. He is a composer in residence of Nagoya Philharmonic Orchestra for three years since 2017. He gains several awards: Grand Prix in George Enescu International Competition (2007), First Prize in Toru Takemitsu Composition Award (2009), Art Mentor Foundation Lucerne Award (2010), Queen Elisabeth International Grand Prize (2012), Akutagawa Composition Award (2013) and Georges Wildenstein Prize (2013). In July 2012, he is also awarded by Commissioner for Cultural Affairs in Japan. His scores are exclusively published by Zen-On Music Publisher.

Daryl Jamieson
Daryl Jamieson (b.1980, Halifax NS) is based in Kamakura, Japan. After studying at Wilfrid Laurier University, he moved to the UK to study at the Guildhall School of Music and Drama and the University of York. He also spent a post-doctoral year in Tokyo, studying with Jo Kondo. In 2018, he received the Toshi Ichiyanagi Contemporary Prize for the third of his Vanitas trilogy of music theatre pieces. Whether composing for Japanese or western instruments, Jamieson’s music is heavily influenced by his study of Nō theatre. His music has been performed across Europe, Japan, and Canada by many soloists and ensembles. His music is published by Da Vinci Edition, Osaka. In addition to composing, he also co-founded the intercultural music theatre company ‘atelier jaku’, and is active as a researcher, writing on the Japanese aesthetics, as well as contemporary music and spirituality. He is grateful to have received grants from the Canada Council for the Arts, and many others. His music is published by Da Vinci Editions (Osaka) and the Canadian Music Centre (Toronto).

Maria de Alvear
The composer Maria de Alvear was born in Madrid (Spain) in 1960. She studied music mainly in Spain and Germany: harpischord, organ, piano, conducting and composition. Since 1998 she has regulary collaborated with her sister Ana de Alvear (visual artist), who has created photographic installations for performances of Maria de Alvear’s music. In 1986 she completed a course in “Neues Musiktheater” with Prof. Mauricio Kagel at the Musikhochschule Köln. De Alvear´s work is interactive and based on a knowledge of energy connections. In every musical event (concert) she combines the power of visual art together with musical structure. To give an example: she creates an installation, placed around a chamber orchestra, using several different materials, such as salt, stones, branches or leaves, clothes, golden or coloured threads, or various sorts of video installations, depending on what the piece of music and the performing space suggest to her. She also performs and sings in her own pieces. The inner essence of her work consists in creating protected open spaces (spiritual space, physical space, psychological space etc.) in which the performer and the audience can experience a profound freedom of being. Some of her pieces are based on themes that are taboo to our Western way of thinking, provoking vehement debates and interesting interactions as a response to her work. This means that De Alvear´s work is also a courageous dialogue with the establishment. The involvement of spiritual qualities and energetic knowledge in her work demands a responsible deep understanding of the great power of music and art, a power that should be taken care of in a good, strong way. Maria de Alvear has been very influenced by the trips she has made to different aboriginal nations in USA and Russia while looking for the inner essence of music and trying to understand the roots of musical development. Working intensively with Tsolagiu M.A. RuizRazo (Cherokee nation) and Rahkweeskeh (Tuscarora nation) has been very important for her. She feels they have been her most important teachers as regards the interaction between music and both physical and non-physical reality. The extremely diverse levels on which her work functions simultaneously are very interesting. “Sound has the quality of putting a particular person’s mind and body in a specific place”. Sound combinations can work on our state of mind as precisely as a surgical instrument, the change of one single note can cause a complete change in the state of mind and physical location in which a person has been before. The way these specific places work in connection with the individual state of a person and interact with a physical and spiritual reality is the foundation upon which Maria de Alvear bases her work.