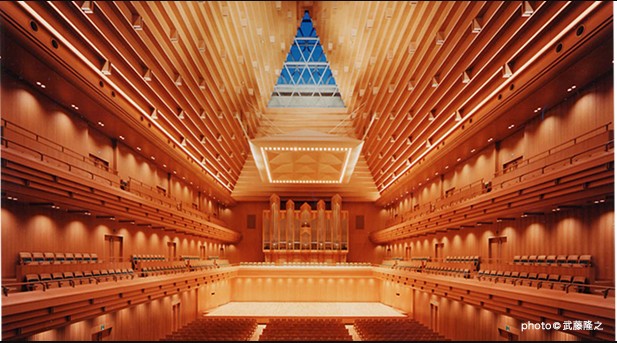 This 45-minute lunch time recital, which is part of the ‘Visual Organ Concert’ series, usually consisting of four pieces, gives you an opportunity to experience the incredible acoustics from the 3,826-pipe organ, which is centrally situated in the pyramid-like space.

The concert hall is build largely of Oak which apparently leads to the amazing sound that is achieved. The pyramidal hall shape is apparently influenced by the well-regarded Maltings Concert Hall in Snape, England.

At the opening night in Tokyo, world famous cellist Yo-Yo Ma stated: “This hall simply has some of the best acoustics in which I have ever had the privilege to play.”