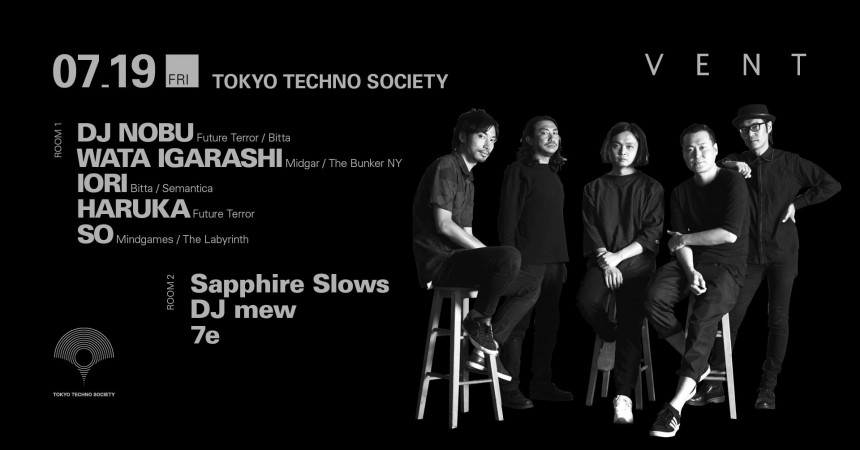 One of Japan’s foremost techno parties, Tokyo Techno Society, will be held at Vent on July 19th. Along with resident DJs DJ Nobu, Wata Igarashi, Iori, Haruka, and So, Sapphire Slows, DJ mew, and 7e will also be performing.

Conveying the high quality of the Japanese scene, up to now the Tokyo Techno Society party has been held 6 times. It has grown into one of Japan’s leading techno parties, and has been leaving a strong impression on the many audience that gathered from both home and abroad. It has helped revitalizing the local scene by further promoting/expanding the resident DJs’ activities, as well as showing the world how hot the Japanese techno scene has been.

This time’s event will feature a set of next-generation, female DJs Sapphire Slows, DJ mew, and 7e spinning in Room 2. Showcasing the vastness and depth of the Japanese scene, a fabulous lineup of wonderful artists has been setup. Tokyo Techno Society embodies the greatness of the current Tokyo techno scene, which is catching the attention of people the world over. This party will surely be one of the highlights of this summer, so come and join us for a night filled with brilliant local talent.