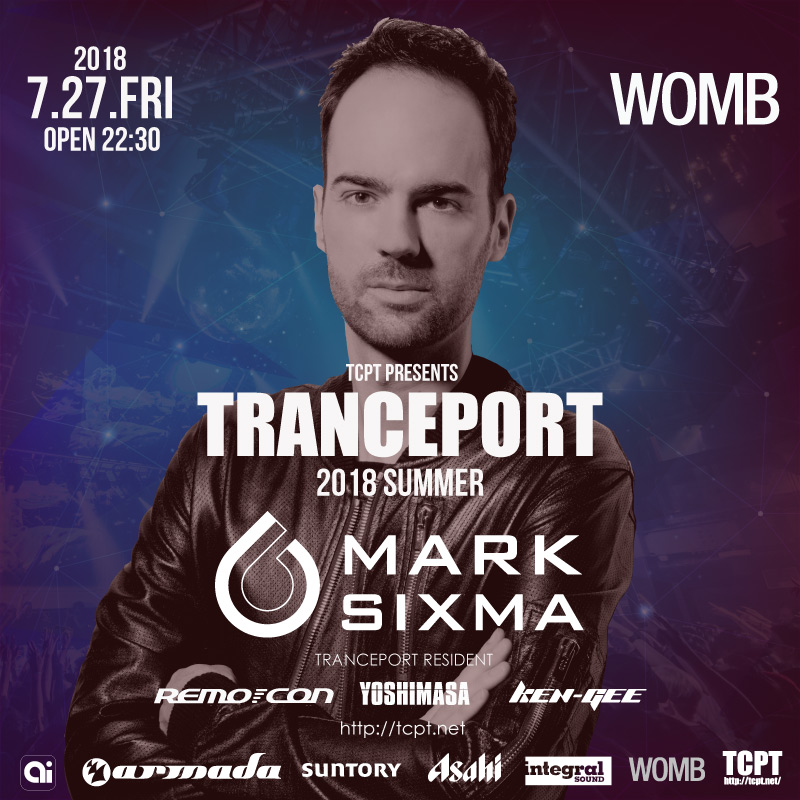 As WOMB’s new TRANCE PARTY, inviting Ferry Corsten and DRIFTMOON in March, and Johan Gielen and LonSkii in April, TRANCEPORT got off to a sensational start. Going by the name of 2018 SUMMER, we announced that TRANCEPORT will be held for the 3 consecutive months of June, July, and August.
For July’s special guest, from ARMADA RECORDS headed by the king of DJs ARMIN VAN BUUREN who was 2012’s number NO.1 DJ and after which has continued to occupy a top-5-spot according to the world clubber’s Bible DJMag’s “DJMag Top 100,” we are inviting one of the artists attracting the most attention throughout the world, MARK SIXMA.
As the top hitmaker at ARMADA, MARK SIXMA’s tunes like “ADAGIO FOR STRINGS” and “RESTLESS HEARTS,” his collaborations with ARMIN VAN BUUREN for “PANTA RHEI” and ANDREW RAYEL for “CHASED,” as well as his REMIX of HARDWELL and ARMIN VAN BUUREN’s huge hit “OFF THE HOOK,” it would be no exaggeration to say that there isn’t a day that goes by that his music isn’t played at not only trance parties but also EDM parties. From Japan, we have TRANCEPORT residents REMO-CON, YOSHIMASA, and KEN-GEE performing.

Combining the highest level of sound and performance, held at “WOMB”—which invariably features in the club world rankings—TRANCEPORT is without a doubt going to be a world-class PARTY.
MUSIC: TRANCE