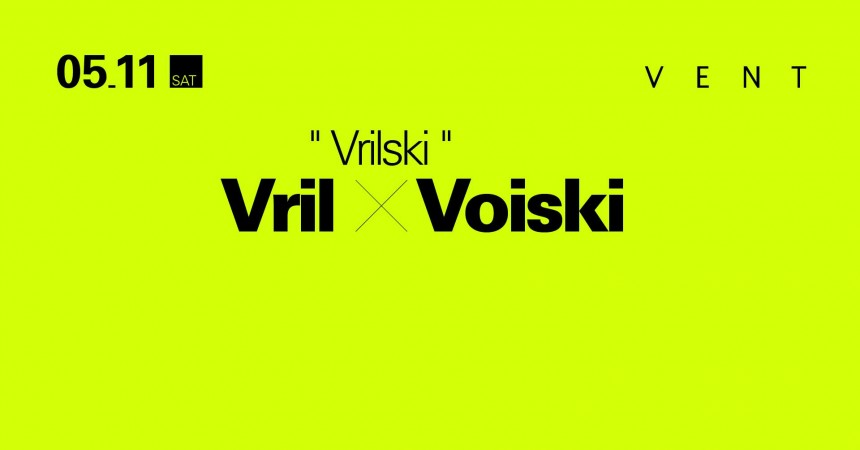 A dream-like collaboration between two of the world’s top talents – Vril and Voiski team up to form Vrilski.

Vril appeared on the scene out of practically nowhere and wowed us with his beautiful noise. Voiski’s approach to music is to select uniquely cosmic sounds that are the polar opposite of what one would deem popular. A common thread these two share is that they were both voted as “Top Live Acts” by Resident Advisor, and now they have formed as Vrilski and will be dropping their first gig on Japanese soil at VENT, on May 11th!

Vril’s sounds have been featured on Marcel Dettmann’s “Conducted” mix CD, and has had works recorded by Ostgut Ton. Described as containing vast energy and sounding like the exploration of changing moments, he has received critical acclaim. Once you hear it, you’ll be hooked – unable to be released from its sonic grasp! Vril’s live set is a hyper-euphoric, ball of energy in the form of sound waves that will send you mind and body on a journey. So much so that Resident Advisor ranked Vril number 10 “top live act” of 2016, among other highly notable artists like KiNK, Recondite, Âme, and Floating Points. His work released on the Delsin print have also garnered a lot of acclaim, and he’s DJed all over the globe.

On the flipside, Voiski is an art school grad who is said to be one of the most structurally analytical (with regard to music) artists out there. His set is based on his own theory of techno music, where looped signals from space have been incorporated as his sonic trademark, so to speak, creating a spiraling cosmic groove. Like Vril, Voiski was also ranked as one of 2016’s top live acts by Resident Advisor (he came in at 36). Voiski will certainly take you on a journey to a soundscape you have never been.

Production, DJing, and live sets – this duo have been highly lauded for their exceptional work in all fields, dubbing them as a sort of super-collaboration. They’ve been all over Europe, showing their chops to crazed fans. Dreamy, cosmic, and sometimes just straight up hard and psychedelic – come and envelope yourself within their sound, and experience something that you’ve never experienced before!

And more
Join the event for ￥500 off !! Click ” Join ” and you are on discount list !! ※You MUST show your mobile phone screen of joined event page at the entrance.
※ Must be 20 or over with Photo ID to enter. Also, sandals are not accepted in any case. Thank you for your cooperation.
URL : http://vent-tokyo.net/