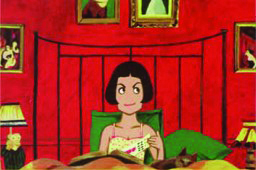 Yuji Miyazaki was a polymath in the world of Japanese film: a director of television shows and commercials, he was also a prolific illustrator, with much of his work appearing in the film magazine Kinema Junpo. His work does far more than depict movie scenes and characters, spanning several media — calendars, posters, theater walls — and including descriptions of film shootings and meticulous Eiga Chizu (film maps). The National Film Archive of Japan exhibits Miyazaki’s early posters, original illustrations and even unreleased works.