The dancehall diva whines it up in Japan

The summer of 2007 was scorching—but the heat was mainly coming from the airwaves as pop music took a turn to the islands. Reggaeton and dancehall dominated the genre and the charts, catapulting Caribbean pop stars such as Rihanna, Sean Kingston, and Sean Paul into the mainstream. At the helm of this trend was then-19-year-old Kat DeLuna, whose infectious dancehall hit “Whine Up”—which featured Elephant Man—was being blasted in clubs and on iPods everywhere.

While her catchy name may sound like one crafted for stage, it has in fact been with her since birth. “Kat is short for Kathleen,” the singer explains. “My full name is Kathleen Emperatriz DeLuna, which means ‘Pure Moon Empress’ in Spanish.” 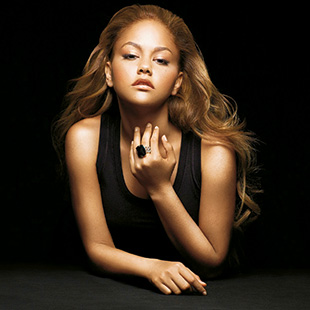 Now on the verge of turning 28, the Dominican-American diva is making a welcome return following her 2010 album Inside Out with the new single “Bum Bum,” featuring singer-songwriter Trey Songz.

Part of that return includes a trip to Japan for her “Asian Beauty” tour. DeLuna has a love for everything Japanese—the people, the food, the fashion—and this trip will see her performing in Osaka, Nagoya, Kyoto, and, of course, Tokyo, where she’ll appear at ELE Tokyo in Azabu-Jūban on October 29, the same night and venue as the Metropolis Halloween Glitterball.

To follow the path that led to the “Asian Beauty” tour, we must go all the way back to New York City and the Bronx, where she was born in 1987. Although she was born in the U.S., her parents are both Dominican and the family soon moved back to the Dominican Republic. It was there that DeLuna formed a love for music.

“Since the very early age of two, I recognized that my passion for music was more than just a thing. I had to have it, and be it,” explains DeLuna.

So, naturally, upon returning to America at the age of 14, the singer soon attended the Newark Arts High School in New Jersey. Her passion for performing grew along with her skills, and a turning point came in 2002 when she took first prize in a karaoke competition with a rendition of “I Will Always Love You,” Dolly Parton’s hit song that was written fully into the cultural lexicon by Whitney Houston and The Bodyguard. Even to this day, DeLuna cites the legendary diva as a key influence, saying that “Run to You” is her favorite song to sing.

Fast-forward to 2006, when DeLuna signed a recording contract with Epic Records, the label that has been home to Celine Dion, Sade, Shakira, Pearl Jam, and Michael Jackson. This led to the development of her first album, 9 Lives, and the release of the aforementioned single “Whine Up” in 2007. This Gold-certified single—whose title comes from the Caribbean English pronunciation of “wind up,” the act of moving one’s hips on the dance floor—reached No. 1 on the Billboard U.S. Dance Club Songs chart, and landed DeLuna a Billboard Latin Music Award for Latin Dance Club Play Track of the Year, making her the first Dominican pop singer to cross over into the mainstream.

In October 2007, DeLuna was named Best New Artist at the Premios MTV Latinoamérica Awards. In the years that followed, her fan base continued to grow, and in 2009 she moved to Universal Music and began work on her second album, Inside Out. The lead single “Push Push,” featuring prolific R&B master Akon, was released in 2010.

With each year, expectations have grown, and one might expect there to be some tough times to work through, but DeLuna says that hasn’t been the case. When asked what has been the most difficult time since her debut, she explains “There hasn’t been one. I am a very positive person. I am thankful for my fans [‘Delunatics’] because they have brought me to this point. I love what I do and always push forward no matter what the situation is.”

Following new singles roughly once a year between 2010 and today, the next step for DeLuna is her upcoming album Viva Out Loud. And that brings us to the “Asian Beauty” tour and the first stop on October 29 at ELE Tokyo. After this, the tour will continue with shows at Vanity Osaka (November 2), V2 Tokyo (November 7), Kitsune Kyoto (November 8), and Orca Nagoya (November 10). Details about all these dates are available at http://dme-world.net.

Finally, DeLuna leaves us with advice for up-and-coming artists: “Be strong and believe that you can do it.”