If you find yourself in Kyushu this fall — maybe for one or more of the several Rugby World Cup matches in Oita, Kumamoto, and Fukuoka — and you want to enjoy some of the island’s natural wonders, here’s somewhere you’ve most likely never heard of: Nobeoka. This compact and relatively unknown-to-foreign-travelers-yet-friendly coastal town, 100km south of Oita City, hosts scenic beauty from mountain to ocean along with gourmet food and historic works of mastery.

Just 30 minutes from downtown, visitors will find mountains capped with peaks of sheer, exposed rock and gorge-ous valleys littered with massive boulders and covered in lush forest. This is Sobo-Katamuki Quasi-National Park, a UNESCO Biosphere Reserve. Rare animals and plants live here, such as the Japanese serow (a kind of goat-antelope), the great purple emperor (the national butterfly of Japan), and the yellow wax bells (a member of the hydrangea family with small trumpet-like yellow flowers blooming in late summer).

The distinctive geophysical landscape is attractive and reminiscent of Yosemite. Hiking trails connect the peaks and pass unusual waterfalls that dance over giant slabs and blocks of stone and even rock cliffs — including a magnet for rock climbers, Mount Hiei. Ice is here for the climbing from December to February with a trio of large frozen waterfalls up to 60m high providing the central attraction. You don’t need to climb the rocks to appreciate them, mammoth geometric boulders are plentiful, including the aptly-named photo-op, Pac-Man Rock (Pakkun-iwa), not far from the campground on the Shishi River.

For longer trekking, the Kamihouri Trail through the beautiful Houri River Valley takes you along one of Kyushu’s most secluded and rugged footpaths to the peak of stone-faced Mt. Ohkue (1644m). After your hike, near the trailhead, soak in your memory of these mountains with the relaxing Bijin-no-yu (“beauty bath”), a natural hot spring at Hourikawa Onsen. Around the corner from the onsen, spend the night in a log cabin or pitch a tent and camp right next to the running river. 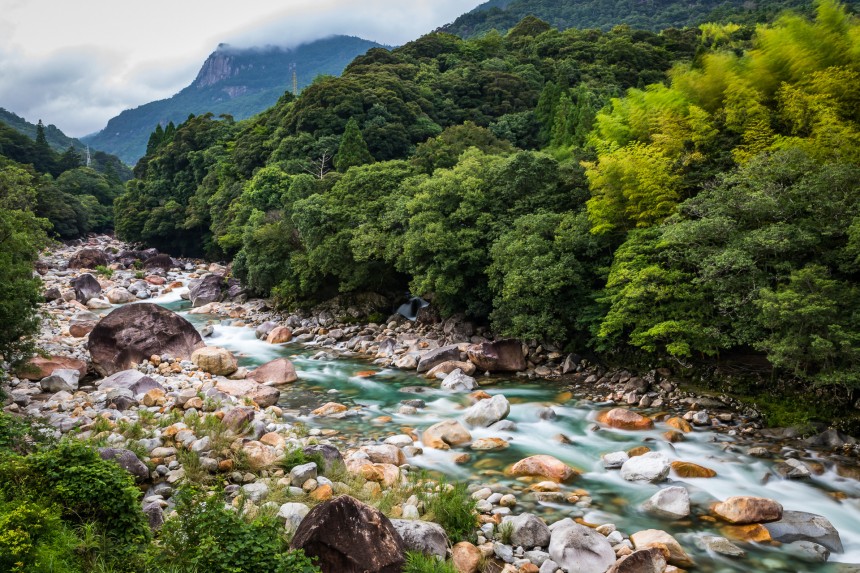 Let’s then get deeper into the flow of things here. This is no ordinary water. These streams rank among Japan’s clearest. Beginning in late October, the changing autumn colors make the scenery amid this backdrop even more striking — perfect for canoeing or rafting. Fishing for tasty yamame (cherry salmon) or ayu (sweetfish) in these mountain torrents is also popular. If you like the fish more than the fishing, check out the huge traditional wooden ayu trap (ayuyana) back in the city from late October through November. The trap has spanned the Ose River annually for 300 years. The structure is Japan’s longest, and there’s a seasonal restaurant right next to it serving the catch in epicurean fashion.

Follow any of the crystal-clear rivers a little further down and you’ll come to the scenic swimming beaches and vibrant marine life of northern Miyazaki’s Pacific coast. The zone around Shimanoura, an island northeast of the city center, thrives with several species of coral and makes for the best diving and snorkeling in Kyushu. Other marine activities include cruising the rocky coastline, sea kayaking, fishing — and of course surfing. Miyazaki beaches draw surfers from around the country and even international competitions. The waters are generally warmer here, due to the Kuroshio Current coming up from tropical Okinawa, so surfers and divers get wet even through November. Experience any of Nobeoka’s mountain and sea activities with a guide and equipment from Nobestar, an NPO corporation. 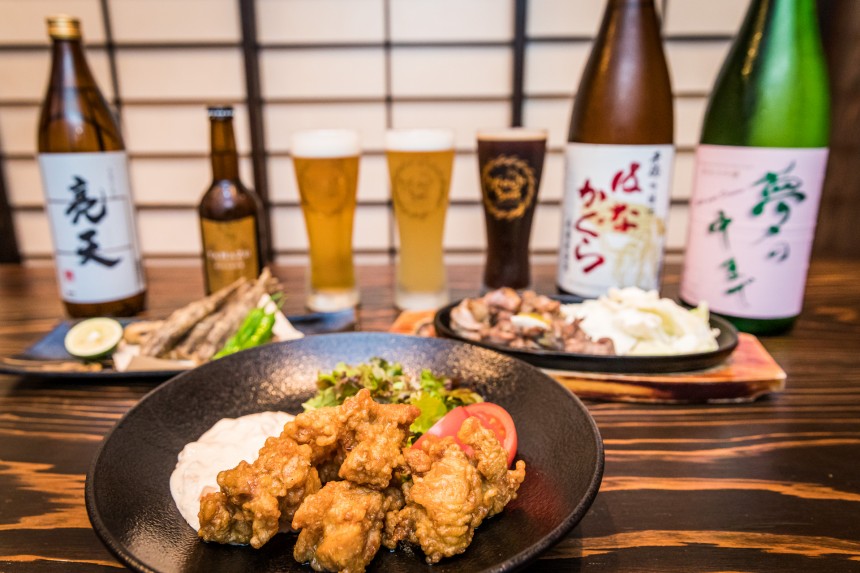 Until now, if you’ve ever heard of something from Nobeoka, it’s probably related to its fine beverages and food. The excellent water here has given birth to a trio of fine breweries known as the Mitsukura. Miyazaki Hideji Beer, one of Japan’s premiere microbreweries, can be visited in a picturesque riverside location in sight of Mt. Mukabaki’s twin peaks and giant waterfall (77m). Their Kuri-kuro, a dark chestnut ale, took first place for stouts and porters at the World Beer Awards in 2017, and all their premium regular and seasonal craft beers can be enjoyed on site. The Sato shochu distillery is also worth visiting at its rural beautiful riverside location, where they’ve been at work for over a century. Finally, the Sentoku sake brewery in Nobeoka City has a shop with its catalog of nihonshu brewed on site, including many award-winners.

Chicken nanban can be found throughout Japan, but it was invented here about 50 years ago. It’s a type of fried chicken lightly dipped in sugared vinegar and accompanied by a special tartar sauce. It comes in two main varieties (using thigh or breast meat), and restaurants throughout the city serve it — but the recipe varies from chef to chef. So, connoisseurs will enjoy comparing the distinctive flavors and styles that are best tasted here. Other culinary highlights include karamen, a bowl of noodles in spicy broth, and locally-caught spiny lobster.

Gourmet originals from Nobeoka combine with traditional theater and master craftsmanship for a special performance each autumn. The center of attention is Shiroyama Park, containing the castle ruins, which date back to 1603 — the year “Hamlet” was published. But this city has its own dramatic treasures in a collection of 66 spectacular noh masks. Kept for centuries by the lords of the castle, 30 of these are known as “Tengaichi” and are considered masterpieces. For one night only, October 12 in 2019, the genuine articles come out in a rebirth of tradition at the base of the colossal castle wall known as the “Killer of a Thousand Men.” It’s an unforgettable Takigi-noh (firelight) performance under the stars that recreates the traditional coming-together of all walks of life in one audience. The play’s accompanied by a bustling market on October 12 and 13 that includes the best of Nobeoka’s specialties.

If you visit after the performance, in November the castle ruins also host the Kagura Festival, where you can witness theatrical Shinto dances similar to Noh. Elsewhere in town, fans of Saigo Takamori, one of the most famous samurai in history — and some say Japan’s last — will appreciate visiting the historic encampment here where some of his personal belongings and armaments are displayed. For an overview of the city, take a drive or hike up Mount Atago for its romantic night view. Spread around the town are three notable michi-no-eki, or roadside stations, with souvenirs and restaurants. Also good for gifts are the shops in Nobeoka’s brand new main train station.

For a nation on the cutting edge of global industries with dazzling densely-populated urban areas, there are also pockets of great natural beauty and small-town hospitality bringing pleasant surprises. Nobeoka may well be off the beaten path, but it’s an area of Japan that deserves to be more recognized and well worth a visit — whatever the season.