When Metropolis reaches OK Go’s Damian Kulash, the singer is in Phoenix for a funeral. Despite the circumstances, Kulash’s trademark enthusiasm bubbles back as talk turns to the band’s tour-de-force video for “I Won’t Let You Down,” shot in Japan. 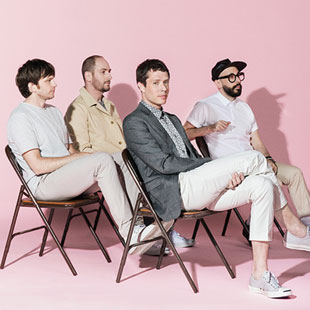 “It really was a new experience in a lot of ways,” he says. The piece features thousands of Japanese high school girls dancing en masse, filmed by drone from above, and the four members of OK Go gamboling about on Honda U3-X personal mobility devices.

“Director Morihiro Harano and the band saw eye to eye,” Kulash continues about the video which, at this writing, had been viewed
15 million times on YouTube. “It’s always magical when you align with someone creatively, and you feel like the whole is more than the sum of the parts. It’s even more magical when you’re crossing the language barrier.”

Choreographed by Japan’s Air:man, “I Won’t Let You Down” is a disco-flavored trifle of a dance number that sees the high school girls—epitomizing kawaii—deploying umbrellas in precise movements to create what from above looks like a shifting work of contemporary art.

People may be reminded of Japanese painter Yayoi Kusama’s dots or North Korea’s mass games, but the main inspiration goes back to 1930s Hollywood. “Busby Berkeley was a famous American choreographer from the ’30s, and he liked graphic aerial shots a lot,” Kulash explains, “so what you see in our video with the kaleidoscopic shots from on high, he often did that in the studio with dancers.”

Forming in Chicago in the late ’90s, OK Go have become known as much for their peppy pop-rock and their stint as the house band for NPR’s “This American Life,” as for their elaborate videos, which collectively boast over 100 million YouTube views.

To what does OK Go ascribe the remarkable audience for their videos online? “We don’t try to spell out our lyrics or match the song’s emotional content,” hazards Kulash. “We look at the shape of the song, and try to match the arc of it. For example, with a sad song, rather than trying to make a sad video, we try to make something with the same ups and downs. What we hope is people will see that this three-minute thing is not about the lyrics, it’s just this piece of art for them to like—there’s a radical transparency of process.” 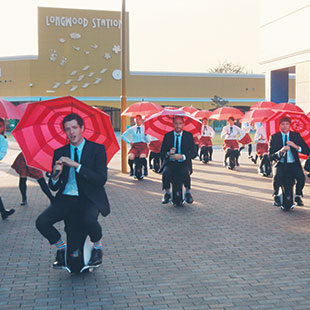 The success of OK Go’s videos means the revenues from them form a key part of the band’s income, and Kulash even appears on panels devoted to the secrets of making viral videos. The band has become something of a poster child for the way post-analog bands leverage numerous media formats to get their music out.

“We like to think that recorded music in the 20th century existed in a bubble and there were no commercial pressures on it, and it was art,” Kulash reflects, “and no wonder we hated the labels—they were doing all the dirty work and paying themselves 90 percent of the profits.”

Kulash observes that in the current, more complex environment of downloads and streams, it’s more difficult to figure out the commercial side of one’s artistic endeavor. OK Go’s solution has been to, so to speak, get in bed with the enemy.

“We find it creatively freeing to go into business with people directly,” he says. “We know then what’s expected of us and vice versa. So rather than having a record company who thinks they know better than you what to do with your art, we work with people who want to be associated with what we do. It’s a much healthier relationship.”

In the case of “I Won’t Let You Down,” there’s the obvious promotion for Honda’s mobility device. “I can’t discuss the specifics of our deal with Honda—but we knew what was expected of us and what wasn’t,” says Kulash. “We knew they would let us make the video exactly as we wanted and have creative control. They didn’t want to change what we were doing because they liked it.”

Kulash says people need to get over the idea of sponsorship as crass. “That’s where a lot of the music is to be found these days because radio plays only a few extremely well-funded acts,” he says. “I have problems with corporate domination of culture, but as long as I’m not in a position where I’m shilling products, I’d rather be where culture is actually happening than try to avoid it.”

OK Go has had a fan base in Japan ever since touring its eponymous debut album in 2002. Last summer’s packed Fuji Rock appearance and the upcoming sold-out date in Tokyo indicate just to what extent “I Won’t Let You Down” has cemented the band’s relationship with people here. “In Japan, it feels like everyone is a nerd about something—whether it’s film or rock ‘n’ roll or bowling,” Kulash says. “Having our music finally take off there just feels right.”

The singer is an astute observer of the way music scenes have evolved since OK Go’s days on the Chicago band scene. “Those communities used to be based around physical proximity,” he notes. “They still exist, but now they’re based around concepts or styles or artistic choices rather than geographic locations.”

Whether in a close physical community of bands, or a digitally diffused community of creators, the social role of music is clearly one of its most important. But Kulash says it’s music’s secret sauce that made it his life choice.

“For me, music is the only thing that can scratch that itch,” he says. “I think the reason why is, life is not simple. In your most joyous moments there is melancholy. For example, I’m talking to you from a funeral today. Being human is so complex and magnificent, and for me the interplay of sounds speaks to me in those complex emotions.

“An amazing fact is that when people sing together, their heartbeats align, and they release oxytocin on the level of sex. Oxytocin generates feelings of loyalty and love, and if you can generate that in a society by performing music, then it has a huge function in making society whole. It’s amazing that you can get the same answer scientifically and emotionally and evolutionarily—which is that music is fucking magic.”