Pop Etc. Plays it Back

Chris Chu packs up some souvenirs on new album

When The Morning Benders announced that they would undergo a name change in 2012, many wondered if this shift would extend to their music. The news came just as the Berkeley-turned-Brooklyn-based group were putting the final touches on their anticipated follow-up to 2010’s Big Echo, an album that showcased the band’s dreamy brand of ’60s-tinged indie pop and amassed them a following worldwide. 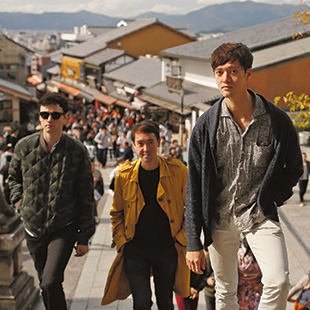 “What I realize is, we really like to try lots of different kids of music,” Chu tells Metropolis during a recent trip to Tokyo, his So-Cal roots evident in his demure, laid-back tone. The singer-songwriter states the versatility of the pop genre is fitting, seeing as he cannot foresee what direction the band’s sound will evolve in.

“The word ‘pop’ is kind of hard to define what it is. If you define it as ‘popular,’ it doesn’t really tell you what it is. But to me, it’s a way of approaching art that prioritizes making some aspect of it memorable—or somehow broad enough to hit a lot of people.”

Shortly after their name change, Pop Etc.—a trio comprised of Chu, his brother Jon, and drummer Julian Harmon—released a self-titled EP of samplers that proved the departure from The Morning Benders was also stylistic. Gone were the surf-pop guitars predominant in Big Echo; in their stead was a synth-laden electro-pop sound.

Three years after the EP’s release, the band is preparing to release Souvenirs in January, their first official album as Pop Etc. Chu says that unlike the initial EP, which the band wasn’t able to focus on due to constant touring, the trio took their time in writing and recording Souvenirs, resulting in a more cohesive sound—even if it meant their fans had to wait a while.

“In the beginning, we decided that we weren’t going to rush to put anything out by any timeline. We just wanted to make sure we were all a hundred percent happy with it.”

On Souvenirs, Pop Etc. is transported two decades into the future from the ’60s, where The Morning Benders left off. Touches of New Wave (“Bad Break”) and Tom Petty and the Heartbreakers-esque stadium rock (“Running Around in Circles”) lace the tracks on the album, showing the massive influence the decade has had on the three members. The video for “Bad Break” affectionately spoofs the low-saturated karaoke videos of the time, as well. 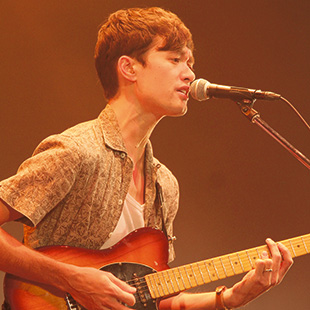 “We’ve always liked the ’80s, but I think a lot of people that didn’t grow up during that time, [they] get a weird slice of it. Just like how people normally absorb music, you only get the hits. It’s just the tip of the iceberg,” Chu says. “We just had this epiphany in the last few years, while we were making this album—at the beginning of it. Why haven’t we gone and researched these bands more?”

Chu was initially hesitant to venture into the ’80s musically due to the fact that the decade is fairly recent, which factored in to the three-year gap between albums.

“Part of the reason that didn’t happen for a while is, the ’80s are still … they’re not old enough that they’ve been completely written into history. Like ’60s classic rock, [which] everyone just knows, like Abbey Road.”

The gap between albums have been far from idle, however. Since their name change, Pop Etc. has branched out into the Japanese music industry, producing for and performing with Japanese artists, including Yoko Kanno and Kaela Kimura. Among their collaborations, it’s Pop Etc.’s work with J-rockers Galileo Galilei that most struck a chord.

“It was especially surprising because I had no idea how this Japanese band found me and reached out to me, so that was really surprising,” muses Chu. “Then you got the language barrier, so there were all these kinds of obstacles that we had to overcome to make it happen. As soon as I met them, heard their music, and [started] playing with them, it just really clicked. We have very similar ideas about music, and we’re both very voracious, open-minded consumers. We’re always looking for new music and new art.”

Japan has also influenced the band’s musical direction in other ways. Japan was Chu’s birthplace, and as such, Chu maintained a deep connection with the country.

“My parents were really interested in Japan; they always had all these pictures of me as a kid here and of their friends here,” says Chu. “It was always this distant place that always was a part of me, but I didn’t ever get to live in; I was so young when we moved to California. But when I came back, I felt a very strong closeness to the culture here and the people here, and it felt very natural. In a way, I realize how a lot of circles in America, especially in New York, that I don’t fit in. I’m a lot quieter than people there, and a little slower. There are ways that when I came here, I was like, ‘Oh this is nice, I feel very at home.’”

Chu’s relationship with Japan was a crucial component in the creation of the aptly-titled Souvenirs, which not only harks back to an influential time period, but also an important place.

“The album, I wrote a lot of it in Japan, and a lot of it was just fueled by my experiences of coming here and working with artists here, and going back and forth,” Chu explains. “It’s impossible for me to even think about this album without Japan.”