Brandon Cronenberg demonstrates without a doubt that he inherited more than a family name from his father David, affectionately known in the movie world as the Baron of Blood. Cronenberg the elder has charmed us with such heartwarming sagas as The Brood, Scanners, Naked Lunch and Eastern Promises.

Blending the Bodysnatchers and the hired-killer subgenres with an art-house aesthetic, the plot has to do with an elite corporate assassin (the always-excellent Andrea Riseborough) who uses brain-implant high-tech to inhabit the minds of certain well-situated hosts, drives them to commit murders that benefit the company, and then kills the hosts. A real sweetheart.

But things get sticky when she finds herself trapped inside a mind (Christopher Abbott) that threatens to turn the tables on her. Rounding out the spot-on cast are Jennifer Jason Leigh as Andrea’s handler, adding her own little bit of weirdness, and Sean Bean.

This mind-bending fever dream is no mere tribute to the director’s father; Brandon’s film makes use of some awesome, face-melting, tactile special effects as he explores new horrors on his way to real originality.

But be warned! As befits the Cronenberg name, this is a truly upsetting sit. Expect copious amounts of blood, ultra violence and nausea-inducing visuals. I even felt a tinge of nausea at one point. NOT for the faint of heart. (103 min) 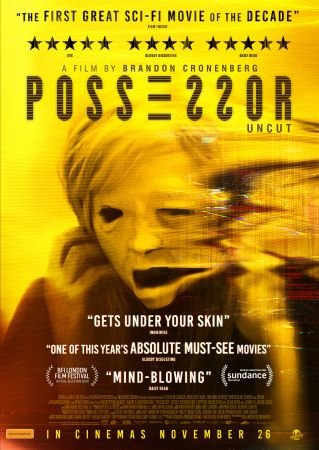