One of the joys of Japan’s biggest rock festival is visiting the small stages that dot Naeba Ski Resort, between the mammoth lawns where the headliners perform, and happening upon unknown bands.

So how did an obscure Swedish klezmer collective come to be a star of the festival? 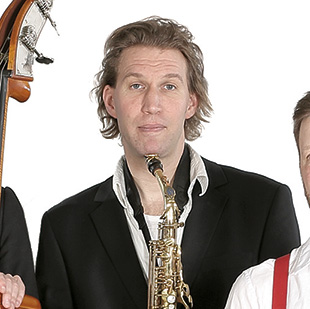 “It started when we met Jason at Glastonbury in 2008,” saxophonist Martin Nurmi says from on the road in Sweden. Nurmi is speaking of impresario Jason Mayall, who boasts a long connection with England’s Glastonbury festival as well as its Japanese sister event Fuji Rock.

“Jason invited us to play his after-party. He said, ‘If you play for me now, I’ll bring you to Japan.’ We trusted him and he followed through, and that’s how we ended up at Fuji Rock in 2009.”

Eight-member outfit Räfven (pronounced “raven”) bowled audiences over that year with their combustible blend of East-European Jewish klezmer and Gypsy music, juiced with the spirit of punk and ska. The group played eight sets and have been back to Japan four times, including an encore at Fuji Rock 2015.

The life of a hardworking Swedish klezmer band isn’t a simple one—wedding gigs and day jobs come with the territory—but Räfven have managed to keep it together since 2003.

“We started out as a street band and didn’t have deep thoughts about which songs we chose,” Nurmi recalls in gently accented English. “We just found we liked the klezmer and Romany traditions, and everyone in the band was composing with inspiration from all these traditions.

“We’ve been together 12 years,” he adds. “It’s pretty impressive and crazy for an eight-person band. We are mostly freelance musicians doing other kind of work, but there’s a lot of time spent together and a lot of love in this band. It’s like a marriage—but with eight people.”

Tonight’s concert is a sedate sit-down event for a classical music audience, but gigs have bordered on the bizarre: one promoter asked them to perform from up a tree. “It was a restaurant opening party, and they wanted us to climb the tree outside the restaurant and play,” Nurmi laughs. “I think it was a better picture in their head than the reality, but we tried—and I’m scared of heights.”

Räfven’s forthcoming Japan tour sees them promoting their new album Bring Back the Dinos. “We stretched out with longer songs and melodies this time, and changed the instrumentation a bit too,” explains Nurmi. “Sometimes, we just had this feeling the dinosaurs will run the world better than humans, and also we are kind of old and now dinosaurs in the band ourselves, so you can look at it from different perspectives.”

For Nurmi, in its own small but determined way, Räfven has meant an opportunity to use music as a springboard to connect with people around the planet—many of whom he can’t even communicate with verbally.

“Music makes people happy, but this specific music—folk music—belongs to all of us,” he believes. “You can feel the connections between the different folk traditions—for example between Irish and American folk, and I think it’s also true with our style of music, it’s easy to connect to in one or another way. It may seem weird, but I think there are even connections with folk music in Japan.

“Music is the best kind of language,” he concludes. “I’m not so good at any other language. It’s a language for the mind, body, and soul—everything. And it’s so important to connect with each other through music. For me it’s a dream.”