Meeting Riccardo Tossani, graduate of Harvard Graduate School of Design and Tokyo-based architect, is like an encounter with a human whirlwind. Spellbinding, polymathic and hugely likeable, his architecture firm, Riccardo Tossani Architecture, is responsible for much of the creative vision and impact in the Hokkaido resort town of Niseko. As master planner and primary architect, Tossani and his company have been involved in the town’s metamorphoses from idyllic ski getaway to resort powerhouse, taking on the likes of Aspen and Zermatt with its regeneration and transformation into one of the newest and most luxurious resorts for high-fliers and big-spenders the world over.

“We won an international design competition for the Hanazono (in Niseko) resort,” says Tossani in an interview at his firm’s office in Tokyo’s Nakameguro-Aobadai. “And that brought us into the orbit of Niseko and we began to realize the tremendous opportunities which existed there.”

“The developers looked at it with the idea that it would be the Aspen of the future. This was at a time when it was hard to find a bed that wasn’t in a bunk room in a pension. These guys had foresight. Because of the environmental reasons, the incredible snowfalls and the beauty of the mountain and the culture of the area and because of their experience in major ski resorts around the world (these were predominately Australians and Canadians) they could visualize a place that had all the makings of an Aspen.” 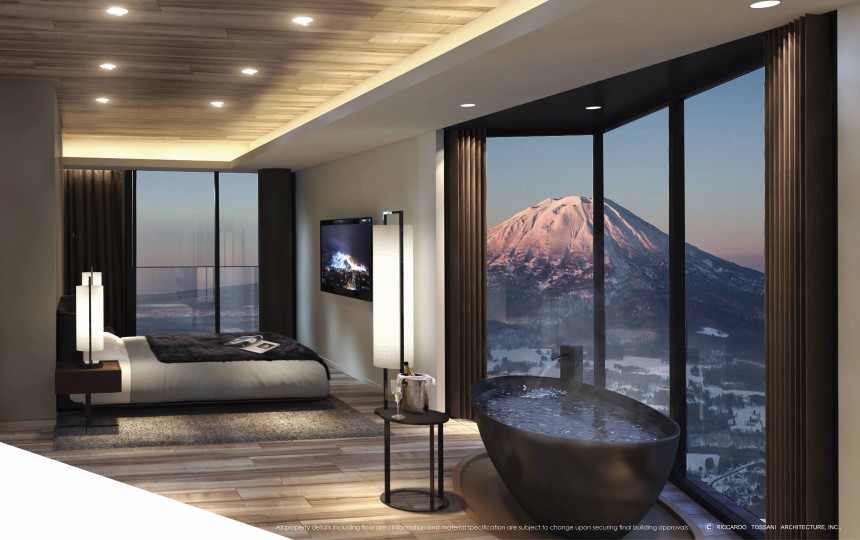 In addition to Tossani’s work on private residences and pro-bono infrastructure concepts (which have all subsequently found funding and gratitude from some local residents and governments), Niseko is going through a massive transition with more hotels, apartments, restaurants and even a scheduled shinkansen stop (in about 15 years) at nearby Kutchan town as well as an expressway extension. Particularly the latter two are sure to attract visitors in flocks to the area. An additional bonus is the huge increase in employment opportunities in an area which is used to letting their youngsters head to Tokyo and, now, finding Tokyoites flocking to Niseko to search for jobs.

“We came in there as architects and master planners and we studied the opportunities from our own perspectives and we had to agree (that it had the potential to be world class),” says the Adelaide native. “The models we had in mind were Aspen on one hand (North American) and  Zermatt, on the other hand (which is very European), of a pedestrian resort community and the idea of the promenade where people do walk and stroll. We understood that the center of Niseko centered around the village of Hirafu, where it was possible to have an international all-season resort because of the inherent characteristics of the place and the forces in play. We did all we could  to enhance this character in our individual private commissions by international developers as well as private individuals, and our work for the local community and Kutchan. In creating these master plans for improved public infrastructure and Hirafu main street redesign, all these factors could become the armature for the international resort destination.”

Most long-term expats in Japan know the name of Niseko as a popular and accessible ski resort town. Once the playground of backpacking Australians and travelling ski bums the area has transformed dramatically in the last few years with even more development expected over the next decade. The Aussies were avid skiers and would enjoy a few weeks on  the slopes, bringing their own equipment and eating in their pensions or in local izakayas. Naturally their presence had an impact on the local economy, but these were nothing like the monumental changes seen in recent times, with the construction of many multi-million dollar condos and luxury facilities which have, essentially, run the Aussies out of town. Tossani explains:

“(The Aussies) helped talk up the place and the initial modest crowd were then replaced with the more professional Australian crowd but that evolved into Niseko being occupied by a new set of visitors from South East Asia and the Far East — even the odd wealthy expat Australian. Then the high networth Asian individuals from Hong Kong, Singapore, Malaysia, Bangkok and Shanghai and mainland China. The current situation is that those people — the high networth individuals — have pretty much displaced the original Australian visitors. They’ve come with different expectations and aspirations and a very big daily budget. They are not skiers. They are beginners, maybe intermediate level, and they’re more interested in fine dining, good shopping (luxury brands), than being on the mountain for eight hours a day. They come for a week but they’ll bring their entire family — nannies, cousins and so on. They buy new skiing gear for everyone, weekly tickets  for everyone and ski for one hour a day and enjoy the other cultural benefits that Niseko has to offer. 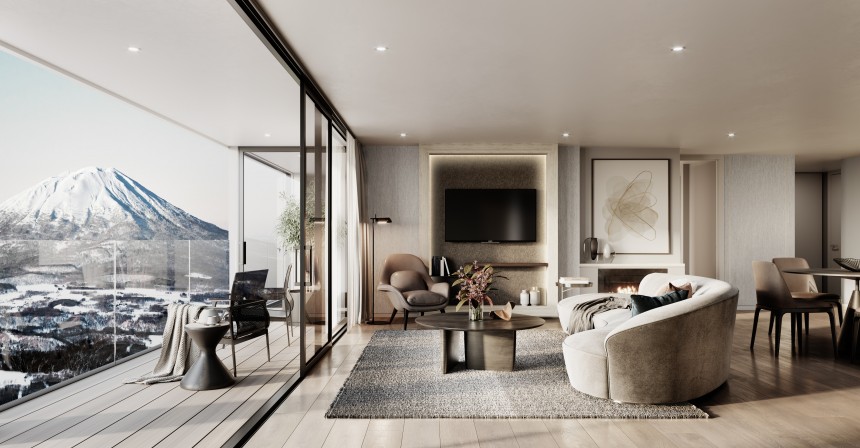 So the buildings have gone from model Aussie shacks to multi-million dollar condos and residences that are very high end in terms of luxury, fittings and amenities. It’s become standard to have a private onsen in your apartment. And the cost is akin to the cost of luxury apartments in Tokyo. And interestingly enough the luxury apartments in Tokyo (which we also do) are selling to the same people.”

Tossani and his firm have had an instrumental part to play in Niseko’s transformation.The town, it would be fair to say, is in the midst of substantial flux and has naturally been exposed to criticism, which Tossani agrees is only fair. On the other hand, he is just as passionate about designing structures which embed themselves into the surrounding, natural areas rather than cutting down forests — which some construction firms have done. His designs sit side by side the local woods and rivers and attempt to blend in with the environment. Tossani’s work on private residences is astounding. He admits that, “in Niseko, within five years, a 15 million dollar house will be as common as a six to ten million dollar house today.”

Alongside the uber-condos and accoutrements, Niseko — the brand — is just beginning. Tossani adds, “We have luxury shopping and more to come, six star hotels such as the Park Hyatt in Hanazono which will be completed in December 2019, The Ritz Carlton has plans for Niseko village and the Four Seasons is also looking at something. We have three Michelin-star restaurants, which we have designed. Two are operating and the third we are designing at the moment. And that’s just in Niseko!”

It’s a sign of the times, with developers looking to find the next Niseko. Japan’s ski resorts and skiing communities may never be the same again, as the super wealthy and luxury lifestyles take over from the old days of log cabins and pub grub in the local family-owned izakaya. Tossani and his company, however, stand firm with their plans for creating a truly glorious ski resort for those who can afford it.