Japan seems to specialize in the quirky, supernatural dramedy and the latest addition to this particular genre, Room Laundering, is actually pretty enjoyable, despite its final foray into melodrama. The flick starts with an unexplained murder and we only learn how it relates to the story much later.

Miko (Elaiza Ikeda) is dark. She wanders around town in pitch black goth garb, sometimes carrying a plastic goose, and talks to no one. She seems to be in a trance or a constant existential crisis, or maybe she’s just a moody 18-year-old. It turns out Miko lost her dad at age five and her mother abandoned her with grandma shortly thereafter. For her whole life, she has been alone and has no friends or at least none that are alive. Miko can see ghosts, there are some she speaks to regularly, like a 10-year-old boy who longs to grow up. 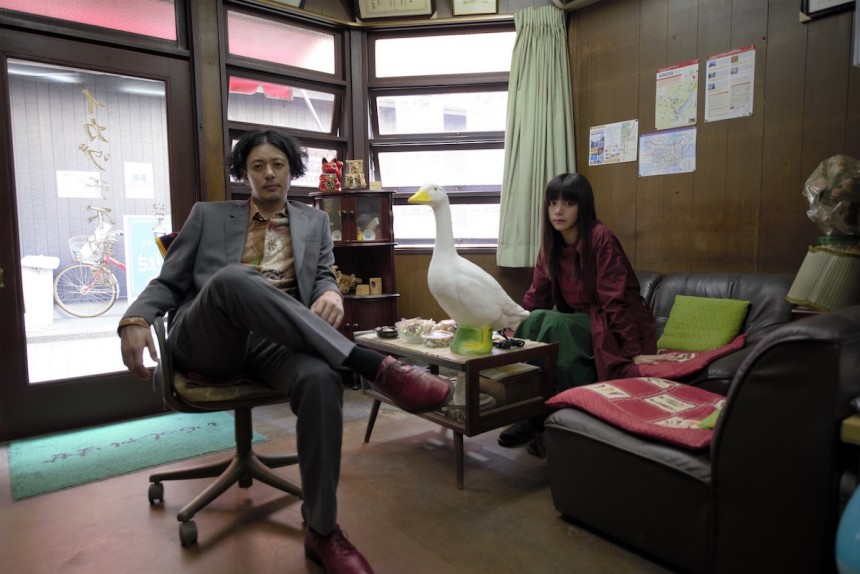 Miko’s only connection to society is her sketchy uncle Goro (Joe Odagiri). He’s a real estate agent that specializes in “room laundering.” This is a scam where agents put a short-term, fake tenant in apartments where a death has occurred to be able to avoid telling prospective renters about the previous tragedy. Unsurprisingly, he uses his young niece in the room laundering scheme so she is constantly moving into new apartments, ignoring her neighbors and feeling lost. Naturally, the job means that Miko is continually meeting new ghosts. In her latest place, she meets the ghost of a rocker who committed suicide due to his lack of success. Indifferent at first, Miko is drawn to the wacky punk and these scenes are curiously funny and amusing. He even starts to insist Miko must continue to promote his musical career even though he’s dead. Fortunately for Miko she is re-assigned to a new apartment, but we soon discover the ghost in this place is even more tormented than the one that preceded it. It’s the apartment where the woman was murdered at the beginning of the film.

The story follows these ghosts’ attempts to get Miko to deal with their unfinished business but at the same time we are shown the protagonist’s backstory. Her whole family has the ability to see ghosts and it’s both a blessing and a curse. Slowly we learn the details of her abandonment, and the healing she needs. Fun and wacky until the final tear-jerking scenes, Room Laundering is an entertaining stroll through an alternate world.