Some might find it odd that the most striking characteristic to catch my eye upon meeting pop singer Skylar Grey was her “coolness.” She had just strolled down to the lobby from her room at the Grand Hyatt Tokyo to greet a small cadre that was to accompany her to an interview with Fox Backstage Pass and Metropolis in Harajuku.

As the itinerary was explained, Grey smiled and nodded before heading to a canary-yellow Chevrolet Corvette Z51 Convertible—her pre-designated mode of travel. If there were any pressing details not ironed out, her demeanor didn’t show it; she just looked cool. Like many of the her soulful songs, there’s a soothing quality about the singer that comes across like the shade cast by trees on a hot day—that cool. 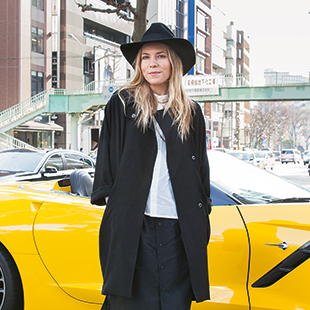 Maybe it stems from the comfort zone she found with music at an early age.

“I started singing professionally with my mother when I was six. I made three albums by the time I was 14. My mother was a singer, and so was my dad. Everybody in my family is in music,” Grey explained. “I have always composed music. At my first piano recital, when I was seven, I composed the song that I played. So when I was 14, I started adding lyrics and I just became obsessed with songwriting. I moved to Los Angeles. I got a [record] deal, but it was always writing for myself and others and movies and stuff.”

As an artist, she enjoyed modest success as a featured singer on Fort Minor’s “Where’d You Go” and “Be Somebody.” But something special about Grey started to emerge that set her apart from her contemporaries: She wrote great songs—songs that major artists wanted to sing.

“Eventually I wrote a song called ‘Love the Way You Lie’ that got picked up by Eminem and Rihanna, and that kind of changed my life! It was huge!”

Huge is an understatement. The song reached number one on 26 charts globally and earned a Grammy nomination for Song of the Year. The buzz about Grey was on, and it made her a hot commodity in a cool business!

“It set a chain of events in motion. I got to work with so many amazing people after that like Diddy, Dr. Dre, T.I., and Nicki Minaj. The list goes on! It’s amazing!”

Grey said the inspiration she draws upon to write songs taps into her basic instincts. “Songwriting for me is pretty much always the same. I come from a personal and emotional place when I write, and then I have to decide whether I am willing to give it up for another artist. It is different every time. Usually I start with the music, add the melody, chord changes and stuff like that, then the lyrics come after,” Grey said.

As her music has developed, so have other interests such as brand tie-ups and a fashion label. It’s the brand tie-up that brought the singer to Tokyo on behalf of Amway Japan. Grey is the spokesperson for Amway’s energy drink. 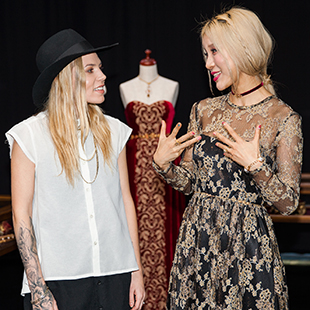 She said her fashion label is still in its initial stage. “I have my own fashion line called Woodrat. It’s not out yet, except for a few beanies, but I am really excited about it. It’s a unisex line because I am a tomboy. I am actually wearing all Y3 right now, which is my favorite brand—ironically Japanese. I’m looking for the right opportunity to release it, but I have all the designs ready,” Grey explained.

Grey got to exchange fashion views with Japanese designer Eiko Gudnason, whose Eiko World collection was inspired by a fantasy world she would escape to during childhood.

While Grey hopes to get back to Japan soon, 2015 is shaping up to be the most groundbreaking time of her career. She has songs on the soundtracks of two of the most anticipated films—“I Know You” from Fifty Shades of Grey and “I Will Return” from the latest in “The Fast and the Furious” franchise, Furious 7.

In composing “I Know You,” Grey said she felt the need to do some research. “I got asked to work on the film track about a year and a half ago. So I decided to read the book. It was interesting. I definitely had a lot of friends tell me they got excited reading it. For me though, I wanted to dig more into the emotional side of the characters and write a song that was based on the love story that was happening.”

Grey said “I Will Return” was penned from a more personal perspective. “It’s beautiful and it’s a song that I wrote and was inspired by Paul Walker.”

How cool is that? I think Skylar Grey cool.