TV On the Radio

A member down, the Brooklyn band is wiser if not wearier

It’s been almost a decade since Metropolis last talked with TV On the Radio. In 2006, the quintet were the latest darlings of the exploding Brooklyn indie rock scene—part of it, but with a lush sound distinct from the disco-punk leanings of many Williamsburg bands of the era.

Nine years later, TVOTR are, if not wizened, then wiser and more reflective in the wake of the death of bassist Gerard Smith, who died of lung cancer in 2011. Their new album, Seeds, is the first recorded without his presence. 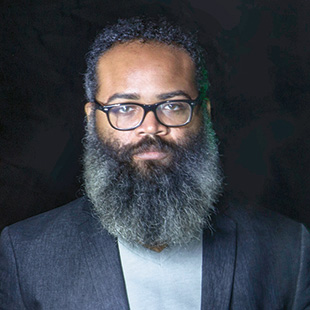 “You do a certain amount of creative work with someone who’s basically a family member, and it shifts the notion of what can be accomplished in the band that had five members,” singer Tunde Adebimpe says from their tour stop in Oakland. “For me, when someone passes away I almost think about them more than when they were alive. That’s how your heart is connected to friends. But in terms of music, he was not somebody who liked to make bullshit; so we’re conscious of that now.”

Adebimpe plays down the direct effect of Smith’s death on the album, but considerations of love and loss are central to the urgency of Seeds. On the elegiac, synth-driven “Careful You,” for example, Adebimpe sings “I know it’s best to say goodbye, but I can’t seem to move away.” It’s a sentiment that could be applied as equally to a disintegrating love affair as to the death of a friend.

Having absorbed Smith’s passing and elected to continue on, the four remaining members of TVOTR—Adebimpe, producer/guitarist Dave Sitek, guitarist/vocalist Kyp Malone, and drummer Jaleel Bunton—are currently in a sweet spot. Seeds has been nicely received as a return to form, and Adebimpe says they’re having a blast touring for the first time in several years.

“We’re in a place now where we realize the value of having been able to pursue the band for as long as we have, and the good fortune to have an audience to sustain us,” he says. “We recognize how special that is—because we don’t make the most accessible music. Bands that are willing to explore as much as we do are not always rewarded with a career, and we realize it’s a super lucky thing.”

TVOTR’s music is unconventional, but on a song such as, for example, “Happy Idiot,” it’s close enough to mainstream at times that one can imagine a record exec pushing them in an out-and-out-pop direction. That’s exactly what happened, says Adebimpe. “We’ve been advised a lot to tone things down to find a wider audience, mostly by people in the music industry,” he explains. “They’ll say, ‘If you would only do this and that …’ You have to look at them and tell them it’s like teaching a fish to breathe air. We just don’t do that.”

Despite the gloss of Sitek’s production work, when you look at TVOTR, you see three aging black guys and one geeky white one—not exactly the recipe for mainstream marketing success. Yet, they’re not really part of the black rock movement pioneered by outfits like Bad Brains, either.

“Thinking about Bad Brains or Living Colour, anytime you have an example of someone who looks like you, it’s helpful to a young person,” Adebimpe recalls about his entry into the rock world. “But I’ve never considered us strictly a rock band, because, if we were, we’d probably have a few more awards by now. There are a lot of rock bands with people of color in them now, but with genres melding, it’s become diffuse.”

Adebimpe says TVOTR are looking forward to their first visit to Japan since a quick solo tour and appearance at Summer Sonic those many years ago. He says these days crowds are asking for “Staring at the Sun” off Desperate Youth, Blood Thirsty Babes, and “Wolf Like Me” off Return to Cookie Mountain.

“We didn’t know what we were doing with those songs,” he laughs. “They just showed up at a time when a lot people connected with them. It was a fresh sound even though we didn’t realize it—we just knew we liked it.

“The best songs come as epiphanies. It’s like seeing a painting that might look dashed off, but it seems more alive than something that’s been labored over for years. I think it’s because you’re getting a message and you jot it down as quickly as you can. You capture the message, and the immediacy of how it’s put down carries through to the song. Especially with new wave and punk—it’s so earnest and barebones, it’s the only thing they possibly could have done, and the energy of that music is still palpable.”