Top tips for English (and other) comedy

Tokyo has a wealth of comedy if you know where to look, from improv to stand-up to rakugo and manzai.

Also be sure to add The Pirates of Tokyo Bay to the list—they’ve got their own feature here! 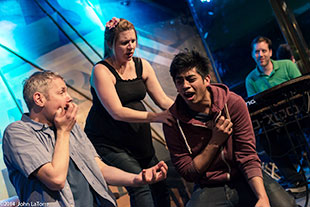 Peril at the Tokyo Comedy Store
(Photo by John LaTorre)

Known as the granddaddy of Tokyo’s English comedy scene for over 20 years, the Tokyo Comedy Store (TCS) offers a variety of shows and workshops to complement its mainstage Improvazilla Musical Show at The Crocodile in Shibuya on the last Friday of every month.

The Store also presents free comedy shows: New Material Night, where promising comedians can hone their skills every first and third Tuesday, and the Gamuso Show in Asagaya twice a month. Also on offer are theatrical workshops in English and Japanese. The Store expects to bring a theatrical long-form show called Mandlebrot’s Dreams—The Impro Laboratory to Tokyo next year.
www.tokyocomedy.com

What happens when you get a bunch of comedians who like to tell funny jokes to each other until they can’t stop laughing? You give them a microphone and a chance to perform in front of an audience, and call them the “Mad Cows of Tokyo.” Funnyman John McBride says the satisfaction lies in making people laugh, so many of the Mad Cow performances are free. Contact for the next show.

Formed just over a year ago, the Shimokita Comedy Boat makes port once a month in its namesake district of Shimokitazawa. Helmed by veteran comedic actor Hiroshi Shimizu, the show offers a junction where English-speaking stand-up comedians from various countries including Korea, Taiwan and China can show their skills. Shimizu is also planning a full-on Asian Comedy Festival in the latter part of 2015.
www.facebook.com/pages/Shimokita-Comedy-Boat/734701283209112 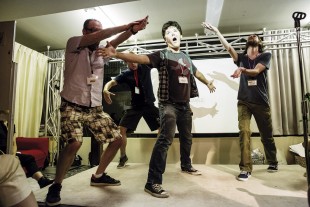 Impro5z 2 Educate takes the concept of learning while laughing to a new level with monthly workshops and shows in Aoyama. Incorporating games based on Cognitive Behavioral Therapy (CBT) methods, the workshops aim to educate ESL students on the benefits of forward-thinking and spontaneous reacting, allowing them to communicate in new ways and have a lot of fun in the process.

Regular Impro5zer Jeremy Eaton advises, “Leaving behind the baggage and preconceptions of our experiences—including negative self-talk—and mapped out with CBT is a cool revelation.”
www.facebook.com/Impro5z

The Impromotive All-Japanese Comedy Show is an exciting whirlwind of non-stop games and scenes that will keep you on your toes and falling out of your seats. Funnyman Seiko Mikami, who’s been running the self-described circus for over 12 years, keeps the show lively with punchlines and side-splitting energy.
www.facebook.com/impromotive

6-dim (“Roku-dim”) is by far the most talented band of inspired Japanese improvisers in Tokyo. With concise storytelling skills and spot-on characterizations, leadman Takeshi Wataru leaves audiences walking away smiling, wondering why they can see a little bit of themselves in each of these characters.
http://6dim.com