Black is the New Black

Fashion takes a walk on the dark side

There’s no getting around the pervasive kawaii present in Japanese fashion right now. In the women’s mainstream, every available inch seems to be either bowed, frilled, or attacked with tulle. And in the men’s case, tastes seem to be drifting towards the extremely boyish, with no sign of turning back. No bad thing in and of itself, but what about those who want to go against the grain?

Fortunately, Tokyo has always catered for those who prefer the dark side, with the old-hands of Rei Kawakubo and Yohji Yamamoto, who shot to fame in the 1980s by dressing their so-called karasu-zoku (tribe of crows), always willing to work in the fashion elite’s favorite color of black. In recent times, it’s been Tatsuro Horikawa’s brand Julius that has kept the dark flame burning. Horikawa has journeyed from the industrial to the apocalyptic—right to absolute austerity—winning fans among outcasts and creative elites alike.

In this issue, we look at the young guns taking on the pastel-tinged force of kawaii. Which side are you on? 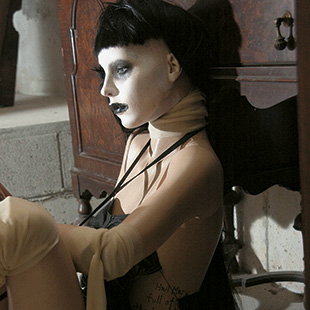 Taking a subversive stance on the tide of kawaii culture is Alice Auaa designer Yasutaka Funakoshi, who takes aim at the doll-like nature of current women’s fashion with his latest collection. The unashamedly gothic designer deployed a series of mannequins, some disguised with eerily realistic makeup as if they were human, and dressed them in the trappings of cute culture. The formula was given a suitably dark sartorial twist, however, with lace stretched thin like spider’s webs, dirty frills, and petticoats spilling out of the bottom of disheveled dresses.

Themed “Beauty of Lamb,” the collection was a targeted discussion of the idea of innocence in women’s fashion, starting with the obvious smatterings of angelic illustrations and passages from the Bible. Frilled cowls and nuns’ habits play a part as well, but extend right through the details with tiny wax seals that bind the models into their clothes, and thick leather bondage straps that criss-cross the body. Standout pieces included the imposition of innocence represented by a vast leather cross creating the back of one dress and some magnificent heels with mannequin hands attached as if gripping hold of the foot.

While the theme of captivity was brought to the fore, especially in the models who appeared slumped in human-sized suitcases, the designer intended the balance of power to fall firmly on the wearer. Even as restraints are applied, the models appeared to be breaking out of their shackles. The imagery might have been conservative, but the styling verged on the salacious; the straps bind, but at the same time resemble armor.

Those looking to join the cult of Alice Auaa would do well to remember that, in order to even access the Harajuku store, a special membership “Zealot Card” (given to those who prove their devotion via their online shop first) must be in hand. But rest assured, it’s worth the cost of admission. 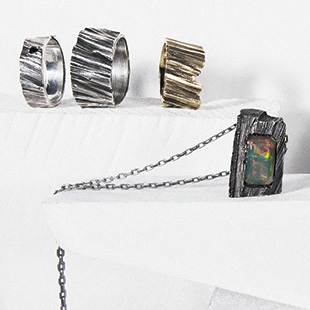 The principle proponent of the darker side of fashion at Tokyo Fashion Week is the exhibition called “The Intersect,” produced by Showroom Babylon, which is responsible for injecting a much-needed dose of artisanal craft and an altogether clandestine mood into the week. The brainchild of creative director Taka Arakawa, the showroom is keen to complete the wider worldview that feeds darker fashion, bringing in photographers, artists, and illustrators to flesh out the context for the uninitiated. It also provides a platform that attracts international designers to Tokyo, this time drawing in similarly-minded designers from as far away as Latvia, Australia, and the U.S.

While a certain darkness is the glue that binds these designers together, each has their own way of channeling it. Japanese accessories label Luce Macchia opts for the contrasting fragility and strength of glass as its medium, crafting stunning chains in toughened glass that uses light as a medium to accentuate the shadows cast upon the skin when worn. Elsewhere Gaspard Helix, who joins the group from Paris, works in pure silver and bronze, allowing a dark patina to form on the metals as if they have just been excavated. The designer works with imperfection in mind, allowing cracks to appear in the castings and also using raw diamonds and opals that look refreshingly organic in contrast to the polished cut forms we are all too used to seeing.

Beyond accessories, Japanese fashion brand Ierib keeps the Kyoto artisanal spirit in fashion through an entirely handmade lineup in which every last detail—patterning, dyeing, construction, and even metal part treatments—is carried out by one man in one Kyoto studio. The resulting creations are almost organic in their appearance, preserving the natural characteristics of his carefully selected leathers, and with rust encouraged to grow in the metal parts. In contrast, young brand Azuma from Kengo Higashi aims for an absolute simplicity that anyone could buy into. By designing with the creation of shadows in mind, he allows subtle pleats and folds to cast shadows on the wearer.

Those wanting to display their dark colors—even if that color is mainly black—can find the group and fellow conspirators online at www.facebook.com/intersect.tokyo.

Based in Japan: Kapuki Kimono

Reiko and Mitsuaki show their dedication to reintroducing the Japanese kimono as modern fashion through innovative designs.