Jockstrap is a duo with wildly disparate backgrounds producing wildly varied yet totally singular output. Coming from the contrasting disciplines of electronic music and jazz violin, both artists share qualities of tireless perfectionism, work ethic and creativity, resulting in music, videos and imagery that all represent a singular, shared creative goal from top to bottom. Metropolis was able to sit down with Georgia Ellery, one half of Jockstrap, while she was playing with Black Country, New Road at Fuji Rock in July and speak with her about the duo’s formation and forthcoming debut album, I Love You Jennifer B, out everywhere on September 9.

Metropolis: Is this your first time in Japan?

M: Are you enjoying it so far?

M: You met Taylor at Guildhall School of Music where you were studying jazz composition and Taylor was studying electronic composition.

M: So your backgrounds are pretty different, what was the impetus to start creating music together?

GE: We both came to London because we were hungry to do something really different. And we knew that it was somewhere that we wanted to be and we’ve both got quite a lot of drive. I think that’s what we have in common. And when we got to Guildhall, there were loads of people doing loads of cool shit. There were a couple of people in my year that were already signed to labels.

So we were mostly inspired by the people that were doing stuff there so I started to write some songs and I’d heard some of Taylor’s compositions, small electronic pieces that he was putting to scenes in films and posting on Facebook and so I asked him to produce the songs.

M: So do you think that environment in itself made an impact?

GE: Definitely. Yeah, it turned into a bit of an ecosystem. People were making cool music and playing it to everyone else and jumping on other people’s tracks. I need some strings here. I need this, can you sing here?

M: Do you come from a musical family?

GE: My mum plays the violin and Taylor’s parents were both on the West End. Yeah, I would say musical.

GE: For both of us, I think it does play in quite a lot. I learned quite a lot. I learned lots about jazz that I didn’t know and that definitely informs my songwriting. I could intellectualize the songwriting and not just rely on my ears. So if I’m stuck there’s always a way for me to look at it.  Taylor, I think the techniques that he uses now, he’s been using since he was quite young. His language is something that has taken a long time to develop. And I don’t think he necessarily learned anything new but he always says that it was more the influences and the music that he was introduced to by the course and then also the people. So we did take things away, but it definitely wasn’t the education that was at the forefront of that. 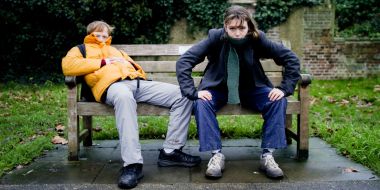 M: I read that when you started your roles were pretty clearly defined – You would write and perform the music and Taylor would produce it. How much have those roles shifted and what does the process look like now?

GE: So it started that I would just write songs, Taylor would produce it and then we would refine it together. And we still do that and we have on some of the songs on this album, on some of the more “songy” ones that tends to be the case. But we also tried him writing the first bit of material like “50/50” he created a beat and he sent it to me and I toplined it and added harmonies, so it was the opposite way around. Which is nice because it’s a nice thing to respond to a bit of music because you put a lot into it if you’re the first person to make the start. And then on other tracks, we kind of worked together, so its a bit of a mix which I think it’s good because it means that the songs are different, the structures are different, and we were able to sort of simplify things, even though it doesn’t sound very simple, its a little bit less structured.

M: How do you find working as a duo compared to with six people in the other band?

GE: It’s different. I feel like my job in Black Country (New Road), even though we write the music together, is more focused and it’s more one thing. Whereas in Jockstrap so much of my time is also thinking about the creative – visuals and artwork, every single little thing we put out is considered. It’s very important to me visually,  how it looks and that everything is cohesive and that’s something I’ve taken lots of pride in with this campaign that we’ve done. I’ve pushed to get the time to think about it, to make it look cohesive. I don’t really do that in Black Country.

M: Speaking of which, I wanted to ask about the film clip for “Glasgow.” You wrote, shot and edited the whole thing, right?

GE: Yes, we knew we wanted to make this video by ourselves and make it a bit more DIY. There’s a sample in the track under the kick drum, which is like someone squelching through mud on a walk. And you can’t really hear it but you would notice if it wasn’t there because it doesn’t feel alive when it’s not there. So we had this idea of movement and I think it’s quite summery for us and it’s a coming-of-age sort of song. So we came up with the idea to have a journey, we’re both on separate journeys but we’re always moving throughout the video. So we just came up with that really simple idea and then Taylor was like I want to be a character. I want to be a goblin, I want to be an elf. So so he did that and we filmed it separately, he was at home in Market Harborough and I was on holiday on some islands off of Cornwall so we just borrowed some Go Pros and filmed it ourselves so the only cost was his prosthetics.

M: Was it your own idea to do it all yourself or were there budgetary constraints that you were working with?

GE: Both but we’ve made videos for Jockstap since the beginning. I always made a video by myself for the first EP and the remixy EP that followed, I made all the videos. I have a “do it with what you have” attitude. As I said, the visuals are really important. I had these strong visual ideas for the video, it was fun. It’s possible to do it yourself. I don’t know, I like watching movies and music videos. It just sort of is a nice extra creative thing you can do to accompany your music. And especially when the music has taken a long time and you’ve slogged over it, directing a video and editing it is kind of just a bit fun for me.

M: I read that you said your lyric writing has become more guarded now – “My lyrics now explore the suppression of feelings and longing.” – why is this?

GE: I don’t know, probably a bit Covid. I don’t get to go out really and then maybe it takes a bit more time to get going again. I’m old but older than I was. When I first came to London, it just blew my mind. It was very formative and you put yourself out there and it was great then you dip a bit, I guess. I’m sure it comes in waves.

M: The new album is three years in the making and it’s coming out in just over a month, what’s the mindset currently?

GE: I’m excited. We worked really hard like really hard. And the lockdown didn’t mean that we had all this time, It doesn’t work like that. So I’m really proud, I’m really pleased, I’m really excited for everyone to hear it and I guess it’s an accumulation of what we’ve been doing for the last couple of years. People know what we sound like and expect the unexpected and they definitely will get that. All the songs are so different on the album and we couldn’t really do anything about that. I was obsessed with trying to make a concept album and making it all sound really contained and like all one thing. Impossible. When it’s me and Taylor working together, we’ve just got so many ideas and we’re so stubborn with our ideas that it had to be something that we both couldn’t imagine. It’s always that way when we write songs, it never turns out the way that you think.

M: The band has sort of a motto of “Do something utterly unexpected, honor your first idea no matter how strange, do nothing you have already heard elsewhere and obsess over the music because everything else is secondary.” How did this come about?

GE: It comes from us being driven people, and very passionate about music and us being stubborn. When we’re making music together, we’re always working towards that process, the best version of it, always trying to better the music and never leaving a stone unturned. I think it’s just the way we work and also maybe the nature of a duo.

M: Is it something you find yourself coming back to a lot? Or is it just the natural way of thinking?

GE: I don’t think we can work any other way. It’s not like, come on, remember the motto! We’re just perfectionists. Maybe a classical upbringing.

M: Thanks for speaking with us, you’ve got a couple of days left in Tokyo, have you got any plans?

Jockstrap’s debut album I Love You Jennifer B comes out on September 9.