Dusk falls as lights flicker to signal a Saigon evening. Food and beverage carts are pulled curbside as tourists survey menu signs and scooters race past, riders beeping horns and zigzagging through traffic. A bed can be found for less than ¥1,000 a night in Saigon (aka Ho Chi Minh City), but be prepared for late-night noise if you stay in the backpacker district, where clubs cater to night owls. In daylight, Ben Thanh market bustles with aisles full of omiyage options, as well as fresh produce and seafood cooked to order. Nearby, a smaller market named Thai Binh, where locals shop, offers a genuine look into Vietnamese life and tasty treats. One specialty often eaten at markets is noodle soup adorned with hot sauce. Choose a noodle and a broth that look good and follow along with locals as they add condiments. Vietnamese pancakes and sandwiches, with thinly sliced meats and cheeses, are also on offer as well as grilled mussels served aside peanuts. 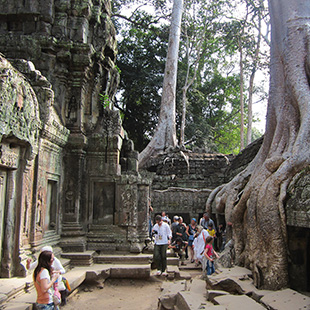 Low airfares from Japan to Saigon make this part of the former Khmer Empire accessible to all travelers and offer easy access to Cambodia. A bus can be taken all the way to the Angkor temples in Siem Reap for as little as ¥1,600, or avoid the bumpy bus ride and fly direct. In Siem Reap, the temples sit as they have for centuries, monuments so wonderful you’ll be unable to avoid touching the ancient stone structures. The largest of the temples, Angkor Wat, was built in the 12th century and took 37 years to complete. More than 1,200 years ago, the Khmer Empire encompassed areas in modern Thailand, Laos, Vietnam, China’s southern Yunnan province, eastern Myanmar and all of Cambodia. In 1623, a Khmer king allowed Vietnamese refugees fleeing civil war to settle near Prey Nokor, a southern fishing village in current Cambodia; but soon Khmer people were unable to stop the mass migration of foreigners, who eventually chose the name Saigon for their newly taken land. Today, Saigon is the largest metropolis in Vietnam. Cambodia gained independence from France in 1953, but the struggle for survival continues among the poor majority populace today. Still, Cambodia remains a safe travel destination that allows visitors to see rustic beauty unspoiled by commercialism, and so it’s poverty that has preserved its authenticity. 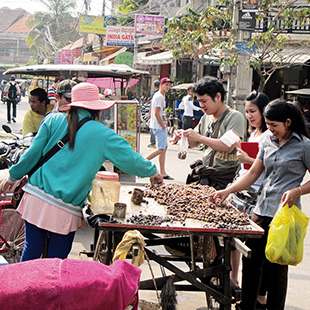 It’s possible to take home more than memories of the special temples with a “rubbing” wherein thick rice paper is placed over a mold made from a temple wall and rubbed with charcoal to recreate a specific scene. You may also consider buying a Khmer scarf, called a krama, worn by both men and women, or a silver betel nut box that was once a common item and status symbol. Clothing and jewelry aficionados will not be disappointed by quality or variety of merchandise. Travelers may pamper themselves in the old empire. Massage and nail salons offer full services, and dinner shows perform traditional Apsara dancing. Follow royal tradition and go for an elephant ride; kings and queens once used the beautiful animals to travel to and from temples. For only a dollar, you can purchase a pineapple or banana bunch and feed the gentle giants that are cared for in the sanctuary. 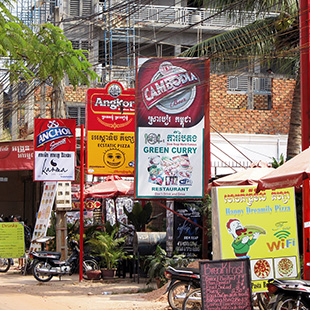 Tourists have many restaurant options that include Indian, Thai, Italian and local fare. Siem Reap market stalls pedal snacks such as fried crab on a stick (four for ¥100), spring rolls, grilled corn and cashews. Beverages include freshly squeezed juices, coffee blends and ice-cold beer. Several restaurants have alfresco tables that give a fine view of street action, with delicious dinners for ¥300 and drinks for as little as ¥50.

Tuk-tuks (motorcycle taxis) are an efficient and fun way to move about the city, and drivers may offer insight into rural life with tours of the surrounding countryside. There’s still opportunity to see Cambodia before it fully develops. Take a cue from Cambodians and go slowly when roaming these picturesque places, but do go and let the kind people show you their artistry and history as they welcome tourists to a brighter future.