The three-piece band keep it in the family

When Metropolis reaches Lewis Durham in England, the singer, multi-instrumentalist and self-taught audio engineer is fixing some vintage recording equipment, trying to get it working alongside the computers at Kitty, Daisy & Lewis’ band studio. 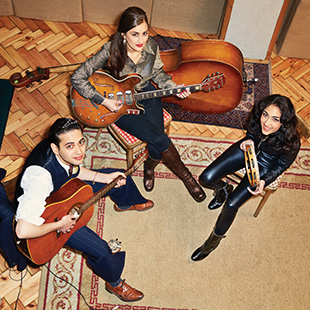 “The old equipment has a more honest sound, and for recording real instruments, it captures it more faithfully than a computer does,” Durham says about the sessions for their simply-titled third album, Kitty, Daisy & Lewis The Third. The trio of siblings not only makes music inspired by ragtime, jazz, blues, honkytonk and vaudeville; they also approach the entire endeavor with an old-fashioned family ethic. Despite emerging from a generation whose musical palette is formed by electronic sampling and hip-hop, Kitty, Daisy & Lewis harken back to an era when performing musical families were common.

“My dad used to sing and play guitar, and his family did, and we did it at home growing up,” Durham explains. “At school there was contemporary pop, but at home there were always old songs being sung. We started off playing older songs because that’s the simplest place to start: You pick up the guitar and sing. I guess it’s considered old-fashioned now, but it seems natural to me.”

Notwithstanding their taste for musical styles from a century ago, the Durham siblings have managed to open the ears of a contemporary crowd, signing with BBC Radio 1 DJ and Bestival curator Rob da Bank’s label, Sunday Best. It’s not just the endearingly vintage warmth of their music but the modern way they mix it up that makes Kitty, Daisy & Lewis’ material intriguing.

Third, for example, takes in everything from the saucy, vaudeville flavor of “Whenever You See Me” to the boogie-woogie beats of “Good Looking Woman,” to the lively rhythms of “Feeling of Wonder.”

“The rhythm changed entirely from what it first was,” Durham recalls about the latter song. “Originally it had more of a jazzy swing to it. Kitty was playing it in the studio, and I started a new drum beat, and it changed out of nowhere.

Kitty, Daisy & Lewis songs often begin as the siblings have always made music: With loose jam sessions. “A certain groove will start happening and then a song will come out of it,” Durham says. “A lot of it is from just messing around, and stuff comes out of it. Often in between rehearsing songs, we’ll get a nice rhythm going, and then put some words on it.”

The Durham siblings (Daisy is the eldest, followed by Lewis and Kitty—and yes, they do fight sometimes) still live together in Camden, where they grew up. They’ve moved out of their parents’ house but seem remarkably close.

“We’d always had music in the family, and when we first started playing it was because someone asked me to come onstage and do a song,” Durham remembers.

“Kitty joined in because there happened to be drums there, and that was it, really. It was basically doing what we’d always been doing, but doing it on the stage. Then Daisy got involved and we added a few more songs, and a friend of ours asked us to join a festival. We didn’t have a name, so he just put on the poster, ‘Kitty, Daisy and Lewis.’ It all started kind of by mistake.”

A few albums and festivals later, the Durhams found themselves backing the likes of Coldplay and traveling to Japan for Fuji Rock. “We’ve been twice to Japan and it was probably the most different place we’ve ever been,” Lewis says. “The last time we hung out in Tokyo with Gaz Mayall (ska impresario and son of blues legend John Mayall). He’s been in Japan a lot and was showing us around these little bars where you can fit around seven people. He called it ‘piss alley.’ We just thought it was amazing.”

But even if their touring adventures end, Durham affirms they’ll always be a musical family.

“I tell people that even if we’re not playing on stage or making records, we’ll have our music at home, because that’s what we’ve always done,” he says.