Rapper, producer, and videographer Sonny B has lived what he calls a “double life.”

The Oakland native’s early life consisted of the duality of facing domestic hardships and gaining family values and respect for higher education through time spent with his father. Despite his childhood’s trials, the core message of his lyrics is one of hope and perseverance.

Now, his “double life” refers to jetting between California and Tokyo. 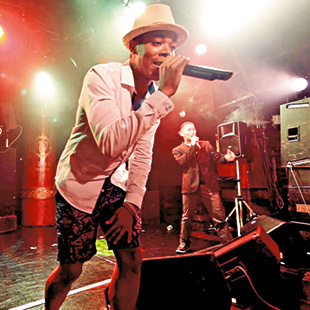 “Since I was young, my only fear was being average; that I won’t have / And so I’m set on this path that’s taking me to places you only imagined,” Sonny B raps on his track “At the Top.”

True to his lyrics, Sonny B, a self-proclaimed nomad, is carving out his place on Asia’s hip-hop scene, working with up-and-comers in Japan like Jinmenusagi and ISH-ONE, and also branching out into South Korea.

But how does a rapper from a California port city end up on Tokyo’s stages?

Sonny B’s journey began when he sang lead baritone in his junior high school choir. Due to his troubled home life—he candidly describes growing up with his mother as rough; his parents were never married—cutting into his attendance, he was asked to drop out of the group.

“I was missing first period to take my kids … sorry, my younger sisters, to school,” he says, adding that, fortunately, he was not expelled.

His passion for hip-hop was ignited when Sonny B discovered the Japanese duo M-Flo through a video game. The bilingualism of the group’s rapper, Verbal, impressed Sonny B so much that he started learning Japanese.

In college, Sonny B found rap to be an outlet, and he’d spit rhymes during break time at an unrelated part-time job. Soon, he started rapping for his coworkers, who were moved by his lyrics. The break room became his regular stage.

Back at school, the Japanese classes shrank with time; but Sonny B stuck with his studies to fluency. Eventually, he realized his ambition to move to Japan.

These days, life abroad is a main influence on his work—especially the feelings of isolation that come with it.

“Tokyo’s a big city, but as a foreigner it becomes really small, and really lonely,” the rapper explains. “The fact that you can’t just hit up your lifelong friends and relatives really hits home.”

Another huge influence is the passing of his mother. His song “Mother’s Day” is a thank-you for everything he’d experienced with her—the positives and negatives.

“Our parents may not be the ones that we wish that we had, but in the end, they want to give us the best. They may not know the best way to do it, but they’re trying.”

When discussing the new environment he lives in, Sonny B says Tokyo and California both have their pros and cons when it comes to trying to make it as a rapper. While Cali is all about name-dropping and who you know, it’s also a place of innovation. In Tokyo, people respect music, he says, but the hesitation to “surpass their bigger brother” makes innovation and competition more difficult.

“Next, let’s start a revolution / Next, let’s believe we’re superhuman,” he raps on “Let Me Fly,” a ballad featuring Japanese singer Yo Hey. It’s clear Sonny B wants to ignite and inspire with his rhymes.

“Stuff might be difficult right now, but if you fight through it, you’ll be a stronger person.”