Twenty-two years have now passed since the death of Saul Steinberg (1914–1999), one of America’s most-beloved artists. Steinberg is also a familiar name in Japan, and the time is now ripe to rediscover and reassess his art.

Steinberg defined drawing as “a way of reasoning on paper.” In sharp, clever lines endowed with humor and satire, he drew the gaps between reality and a mythologized American ideal and ludicrous absurdities, such as the intermingling of old and new, graceful and frenzied, as well as the invisible gaps between them. Visualizing invisible lines, objects, words, and structures, throughout his career he pursued the challenge of transforming meanings and concepts.

It seems that Steinberg himself had accepted the ambiguity of his profession, and was named in various ways as “a writer who draws,” as well as “an architect of speech and sounds,” “an artist on the borderline,” and “a draftsman of philosophical reflections”. Constantly crossing boundaries into unknown visual territory, he tried every style and every method of expression, from children’s drawings and adult doodling to classicism, baroque, mannerism, expressionism, cubism, and constructivism.

Remarking  that  “I  appeal to  the  complicity  of  my  reader,” Steinberg  encouraged his  viewers  to participate, in order to draw their attention to the irrationality of reality. With such thoughts and ideas as weapons, he created images that transformed the pages of many publications, including the Italian humor newspaper Bertoldo and the prominent US weekly The New Yorker, into forums of art just as distinctly as pictures by Picasso on the walls of museums.

This first large scale exhibition in Japan brings together a total of around 280 works, including 62 posters, lithographs, etchings, and woodblock prints contributed by The Saul Steinberg Foundation in New York, seven posters contributed and loaned by the Makoto Wada office, 5 issues of Derrière le miroir from the Galerie Maeght in France, and reproductions of representative works with a focus on drawings.

According to exhibition supervisor Mr. Kijuro Yahagi, “Even if most people shown Steinberg’s drawings initially react by laughing at the impossible scenes, they soon become perplexed, halt their thoughts, and are left dangling.” We invite you to experience this sensation for yourselves at the exhibition. 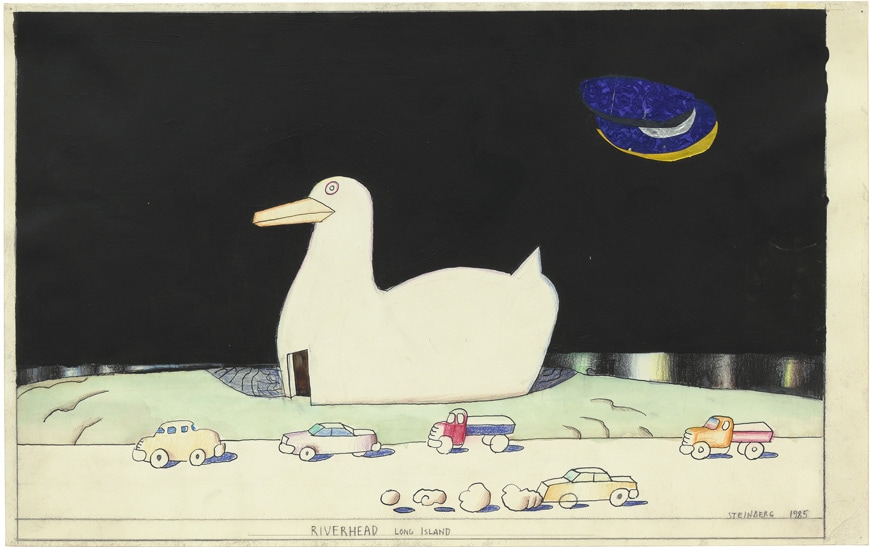