Metropolis sat down with German polymath Serah Alabi to discuss her upcoming photo exhibition titled “THE GREY AREA –  in between identity and sexuality,” opening July 26 at the Hive Jinnan. Alabi, a postgraduate student at Bunka Fashion College, is an accomplished photographer, journalist and academic. Her first solo show in Tokyo is a reflection of her desire to shed new light on sexuality and identity in modern day Tokyo.

Metropolis: What is your background? How did you become involved in photography, journalism and academia?

Serah Alabi:  My family moved to Germany from Nigeria when I was three or four, and I spent pretty much most of my life there until I moved to London for university. I studied fashion journalism for my undergrad, but I have been photographing since I was 16 or 17. Throughout my studies it was more of a hobby, though, and not something I thought I would pursue as a career choice. I always had an interest in history, which was my major during high school. I remember writing my first paper at 17 on Jeanne d’Arc (Joan of Arc) and how I enjoyed the research part, but during that time it wasn’t something I really realized I was good at until my strongest subject was academic writing and all of the papers were on women’s studies.

M: Can you tell us the details of your current exhibition at the Hive Jinnan? What is the reasoning behind it?

SA: My exhibition is an embodied research, which is part of my thesis topic. I am currently investigating the “female gaze” in Japan through female Japanese photographers and I was curious to see how I could interpret that through my lens. I started my research last year in September and it took me almost a year to finalize this project. The result is me giving people who are extraordinary and represent the current pop culture in Tokyo a platform. 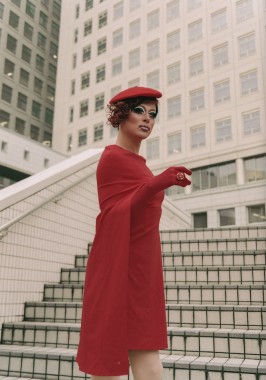 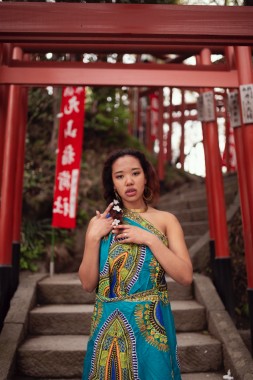 M: You said to me before that, “With the exhibition I want to give Japanese people a different kind of choice: the choice to explore their sexual identity between the grey area and beyond.” Could you expand on this?

SA:  When I first came to Japan, I quickly noticed how much of a group culture it is. The mentality is to always belong to a certain group, and don’t you dare try to be your own self. Growing up in Germany, it was always more about individualism so I had a hard time “fitting in” as it went against my upbringing. When I came across the Japanese proverb, “the nail that sticks out gets hammered down,” I didn’t think it was narrow-minded. It is in human nature to gather, whether society dictates it or not.

Being boxed in a black and white world, where dominant discourse argues that men and women have an inherent nature and those who go against it are abhorred, sure is suffocating. It was time to show another option. With my photographs, I want to imply that it is equally unnatural to conform to societal notions of what is natural for women and men. That’s how I opened up “The Grey Area” — a platform that doesn’t didact who you should be or shouldn’t be.

M: You are a genuine polymath. You study at Bunka, do some very skilled photography in addition to writing. Do you have a preference — academia, photography or writing?

SA: Thank you so much! I am still in the process of developing my own visual language and I don’t even know if I will ever reach that end game, where I can define what I actually do. For me, writing, photography and academia are all integral to my creative practice.

M: What are your thoughts on today’s Tokyo fashion scenes? Are you inspired or disappointed that it is, arguably, less creative than the heights of FRUiTS magazine 20 years ago?

SA: I wouldn’t say it’s less creative than 20 years before, but the amount of street pop culture that was created in the late 1990s and early 2000s has adapted itself to today’s digital age. The cultural changes that people were experiencing during that time had materialized in the way people dressed on the streets, from a nonverbal communication conducive to a digital visual documentation. The images we see from FRUiTS magazine are archives of images that inform our collective memory of what shaped the innovation in fashion in Tokyo. The difference between now and then is that Japan’s youth are more exposed to the world, with people from all around the world trying to bridge cultures. Today’s Tokyo fashion scene is exhilarating, modern and sizzling. With so much knowledge and inspiration on demand, it is raw but with defined edges — you don’t know what the end result will be, which makes it even more thrilling to follow. Therefore, we shouldn’t be constantly looking back, that’s not the way we want to go, but enjoy the creative outputs we have right now. Otherwise, when the past becomes the present, we will lose the opportunity to impact the future. 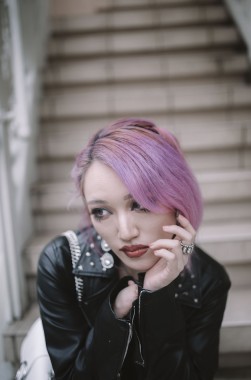 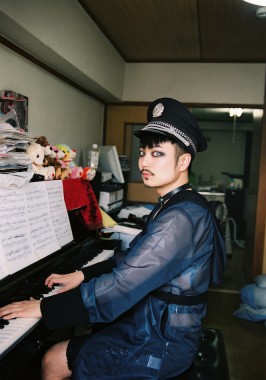 M: The title of your exhibition is  “THE GREY AREA –  in between identity and sexuality.” Can you tell us more about the title?

SA:  I was reading a research paper on the photographer Diane Arbus and how she went against the dogma that mirrored the hard and fast distinctions between masculinity and femininity in the late 1950s and 60s. The “grey area” is actually a term first associated with her. It is a space where the conventional boundaries of femininity and masculinity are exploited, but one’s original gender remains. I was fascinated with the “grey area” and thought what would happen if I opened this space for Japanese people for them to comfortably express themselves in whatever way they wanted. Japanese people have been doing it for ages — what I did was just put a label on it and create a platform and save space for them to show the world. I believe it’s the right time for a change, and this means rethinking how Japanese people are represented in our collective imagination.

M: How did you find the subjects for your exhibition?

SA: I found them on the streets, social media and through referrals from friends.

M: What was the process like working with them? Did they have any say in how they were photographed?

SA: Why would you give someone wings if they aren’t meant to fly? When I started the project, it was clear that I didn’t want to just photograph models, but rather have the people collaborate with me. This exhibition is not about me. I am just the medium that portrays their individuality through my female gaze. You just need someone to help you see parts of yourself that aren’t so obvious, and I hope I am that someone to them. 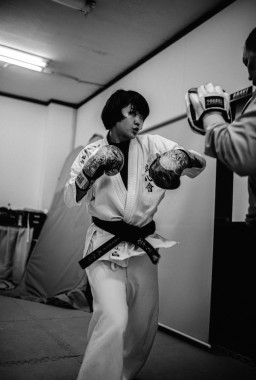 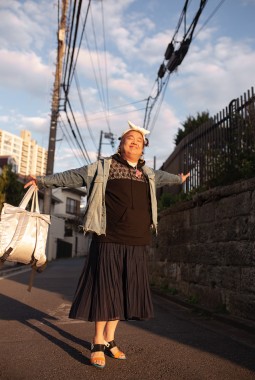 M: What’s your next step? Are you planning any further exhibitions or creative projects?

SA: At the moment I just want to shoot and write. I have several long-term projects that I want to pursue in the future. My current creative project that I have been thinking of executing is still in its raw stages, but I hope I can realize it soon. Other than that, I am writing and researching my thesis, which focuses on female Japanese photographers and the female gaze.

M: Has living in Tokyo had an effect on your creativity?

SA: Tokyo has been my creative vacuum. The people, the city, its culture — I have been sucking in everything and I can definitely see how I have grown in just a couple of months. If someone told me at the beginning of last year that I would be holding an exhibition and contributing to the creative art scene in Tokyo, I would have laughed. I never used to publish my works on a bigger level, always having that tiny amount of self-doubt and fear of people criticizing my work. But at the end, I realized that I could not become what I want to be by remaining how I am. I had to let go of the illusion of “what if.” One of my favorite quotes from Maya Angelou is, “If you’re always trying to be normal, you will never know how amazing you can be.”