The Art of Handmade Jewelry

Jewelry designer Takuji Hayakawa’s creations are exclusively one-of-a-kind. Hayakawa brings each unique piece—handcrafted upon request—to life on his own, though the vision is conceived together with the customer through careful discussion. Creating the finished product, which takes no less than a month and begins by melting a lump of metal, is no easy process. But it’s a greatly rewarding one, as Hayakawa hopes to produce timeless jewelry that can be treasured through generations. 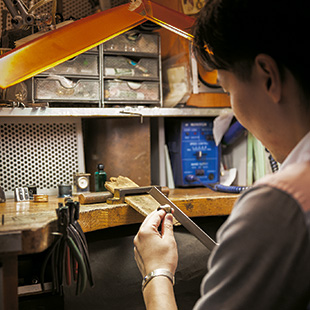 Although once a popular trade during Japan’s prosperous “bubble economy” era, very few custom-made jewelry businesses exist today. Hayakawa learned the craft from his own father, and is the third generation of his family to take up the profession—though he was not set on this path from the beginning. There was never any pressure from his parents to follow in their footsteps, either. Hayakawa even worked different jobs before he finally decided to join the family business. It was during a trip to Italy—where many small, family-owned jewelry businesses still exist—that he discovered the beauty of the vocation.

Although jewelry design, Hayakawa explains, doesn’t require specific qualifications like those needed to become a doctor or a lawyer, it can be difficult to master without the proper equipment, or a shop in which to display and sell products.

In this regard, Hayakawa was lucky, as his family’s shop, Shinku’S, provided him with the necessary environment in which to

begin. Now that he’s been creating jewelry for some time, having been at the shop’s Roppongi location for nearly a decade, Hayakawa feels that the job is quite fitting. Interacting with the customers and designing the pieces, he says, comes naturally to him.

Many people who visit Shinku’S look to create a special piece of jewelry that commemorates a big occasion, such as a marriage or the birth of a child. Hayakawa recently crafted a “baby ring” to be gifted in celebration of a first birthday. Although the miniature ring is only worn by the baby for the photo-op purposes during the celebration, it can later be placed on a chain and worn by the mother as a necklace. This particular baby ring was made with an 18-karat gold-and-platinum band decorated with diamonds. Such a luxurious, gorgeous piece that also holds great significance, Hayakawa explains, is only possible because it’s handmade.

Cultivating relationships with customers is an important part of the job, and some of his father’s customers have been with him since the beginning—40 years ago. Working within an established tradition is rewarding, but comes with the challenge of finding balance between maintaining the tradition while cultivating Hayakawa’s own distinct style. This can only be found through time, he explains, by continuing to create jewelry and hone his skills.

Custom-made jewelry, Hayakawa says, is not merely an accessory, but something that can be treasured forever, and brings its wearer joy. It holds significance beyond its material value, and comes with the thrill of owning something that’s one-of-a-kind, unlike anything else in the world. The greatest thing about creating these unique pieces, Hayakawa says, is that he’s fully involved in the process, from start to finish.

“Jewelry,” he explains, “has been around since ancient times, and will continue to be a part of people’s lives. To be a part of that feels great.” For Hayakawa, the decision to purchase handmade jewelry is all in the timing. “There always comes a time when jewelry is necessary. If you could keep us at the back of your mind when that time comes, I would be very grateful.”

The best workshops in Tokyo this September 2021