A sense of honeyed sadness suffuses Nagano indie rockers Ogre You Asshole’s new album Papercraft. “If you must put it into words,” frontman Manabu Deto says of the trilogy the disc completes, “the unifying theme of those three albums would be ‘someplace cozy and comfortable, yet miserable.’”

Deto is reluctant to comment further on any specific themes of the album’s songs but prodded on the matter, offers the following metaphor:  “Something that looks decent on the surface could be so shallow and flimsy when viewed from a different angle—like a stage prop in a play.” It’s a sentiment reflected in the cover of Papercraft, which depicts a Hollywood-style building façade: All surface and no depth.

Perhaps it’s the slower pace of country life or the distance from Tokyo’s commercial entertainment industry, but Ogre You Asshole’s sound impresses as more contemplative than that of many indie rock outfits in the capital. 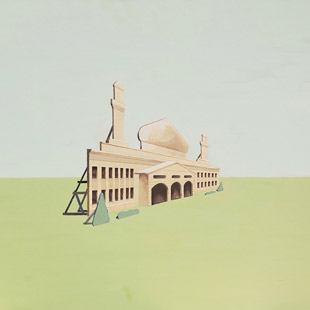 Since forming a decade ago in Nagano, the band has stubbornly resisted the lures of the big city. The ability to step back and do something expansive and conceptual is important to its members. “Creative activities of artists change with the times,” Deto says, “even more so in the rapidly changing times we live in. In such a transitory world, in order for Ogre not to be affected by fast-changing trends and create a series of works with a strong unifying theme, we had an understanding between the band and our production team that it was necessary for us to take a few years making three albums so our listeners could gain an understanding of our work.”

Papercraft launches with “Someone’s Dream,” a noire outing that sounds like it could appear on a Wim Wenders or Quentin Tarantino soundtrack. The album then segues through the boogaloo beats of “Perfect Lovers in the Perfect City” to the laconic, slide guitar-driven title track.

Deto cites Sakamoto’s “strong concepts,” and Papercraft was in fact produced by You Ishihara and engineered by Souichiro Nakamura, both of whom worked with Yura Yura Teikoku. The album’s analog recording approach and use of vintage instruments like the mellotron also impart a nostalgic acid rock atmosphere that gives it a certain kinship with Sakamoto’s work.

Ogre’s psych rock appeal has made the group a favorite touring partner of bands like Modest Mouse (whose bassist gave them their name from the film Revenge of the Nerds), Wolf Parade and Deerhunter. Live, the band stretches out on extended improvisational excursions that evoke Krautrock, another key influence.

But Ogre You Asshole aren’t trying to lead or follow any specific trend or pop music phenomenon. “For the past few years, I’ve been listening mainly to music of the ‘60s and ‘70s, so I don’t really know much about the current music scene,” Deto says.

“I thought bands such as Deerhunter, MGMT and Wolf Parade, with whom we performed in Japan, were all good. I recently heard Flying Lotus and Ariel Pink, and they were good too. But we don’t really know much about them and aren’t so interested in what’s happening in the Japanese band scene.”

Ten Indispensable Albums
We asked Ogre You Asshole’s Manabu Deto to tell us about ten albums he simply could not do without.